Someone asked me to include some of my Portraits on this blog.

I drew and painted many hundreds of children in schools, but here below, are a few oil commissions 1977 – 1982 thereabouts.   I still do a few commissioned portraits, but not big oils any more – for lack of space and time, as I concentrate on writing.

Her name is Ann.  She was painted in about 1982, somewhere in Surrey.   I would love to find the original, and take a better photo, so as to see more clearly the velvet curtain, panelling and little landscape picture. 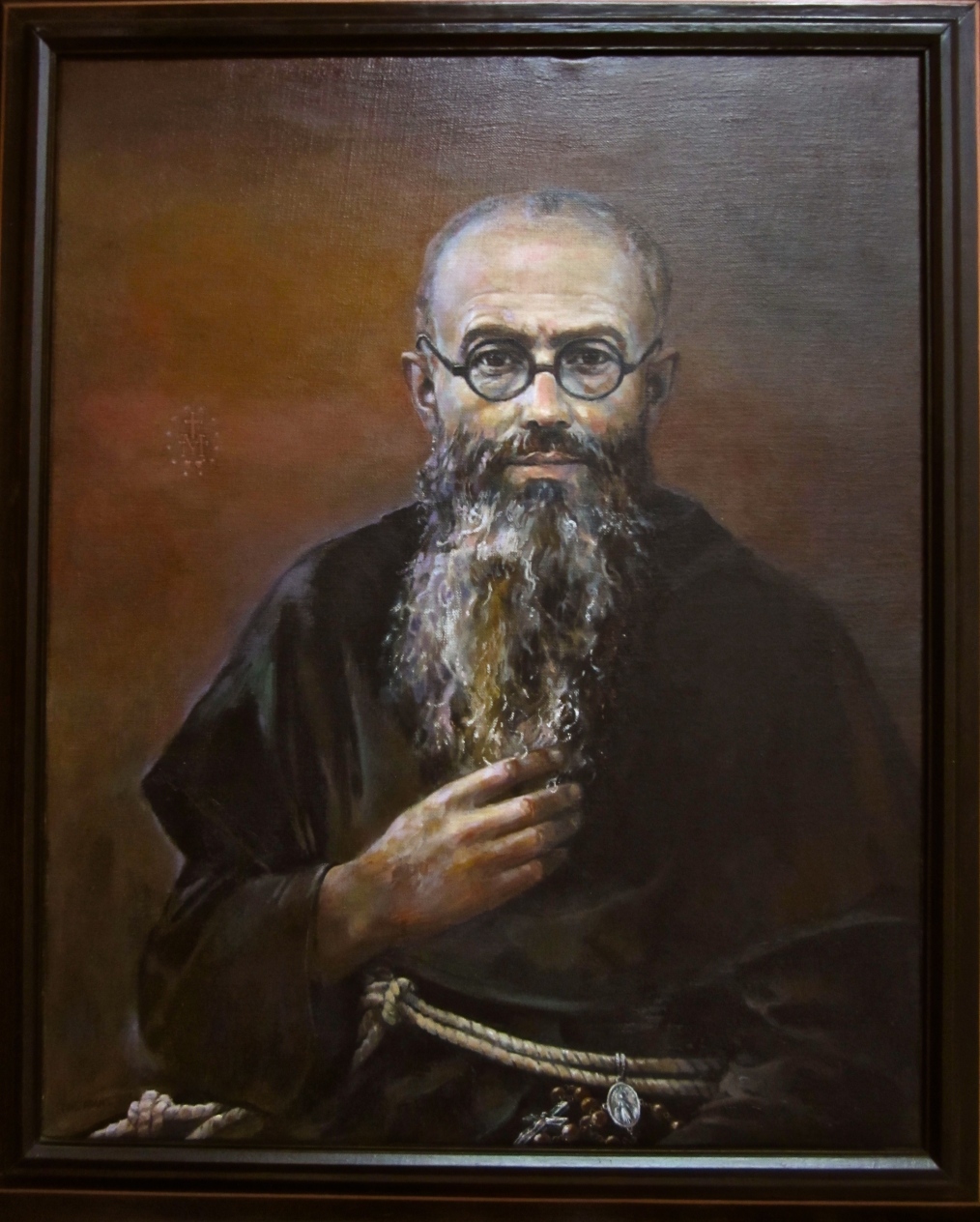 Here is Father Maximilian Kolbe, a Polish Franciscan priest who died in Auschwitz.  His story was remarkable.  He founded a printing-press and Journal, which circulated through Poland and Japan – a gifted communicator, always on a shoe-string;  he trusted in pennies from heaven and created The Crusade of Mary Immaculate, or Knights of the Imacculate.  Her symbol is near his right shoulder.   He was one of her ‘Knights’.   All his adult life, he suffered from TB, which made him unusually creative.   He refused to cooperate with the Nazis, and ended up in Auschwitz.  During a death-cull, he offered himself in place of a younger man who had a wife and children.   Untypically, the guard agreed, spared the other – who lived to tell the tale – and Kolbe went to the death chamber with many hundred souls to starve.   He was the last of them to die:   he uplifted their spirits by helping them to sing out loud;   so they all died in a state of grace.   Because of the way he inspired people during his life and in his manner of dying, the Catholic church has “rushed” his canonization.

I painted Kolbe in 1983, inspired by a painting of him at Auschwitz, in the church in Soho Square.  He was an extraordinary presence, protection and inspiration in my house, during a very difficult time.   I gave the painting to the Dominicans at Southampton Road;  it has since returned to me.  I discovered while doing it, my keen enjoyment of symbolic detail in the medal of Our Lady and the rosary.   It is not very easy to see in the reproduction, but the beads became – with heightened awareness – a figure-of-eight cluster of planets dancing around their Sun.

I was for ten years a Catholic convert.   I met among the Dominicans, the church’s face of compassion and practical honesty, facing history with the resolve to do better.   They preached wonderful sermons of awareness and responsibility to the Now, and understood my growing commitment to esoteric studies.

The portrait took shape as I reflected on Maximilian Kolbe’s biography, a few photos, and a research visit to the Franciscans at Waterloo, who were most helpful, and put on a “fancy dress parade” to display how the robe should be worn.  I have painted many posthumous portraits.   They emerge through a strong interior contact, helped along by sketches.   The process is by trial and error, as the imagination takes the reins and “tunes in”. 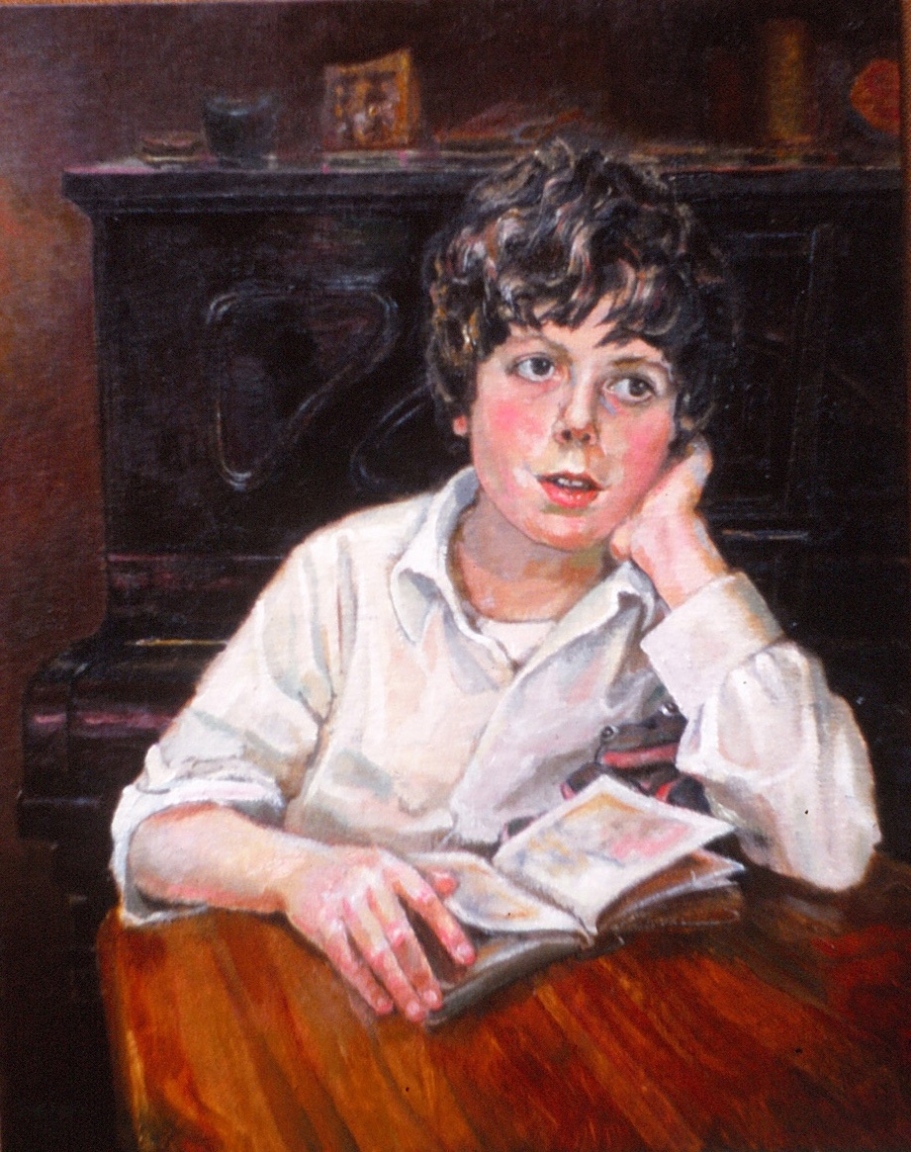 Here is Master Gottlieb, of Highgate.   I have just noticed – and recalled – Mr Frog, tucked behind his left arm. 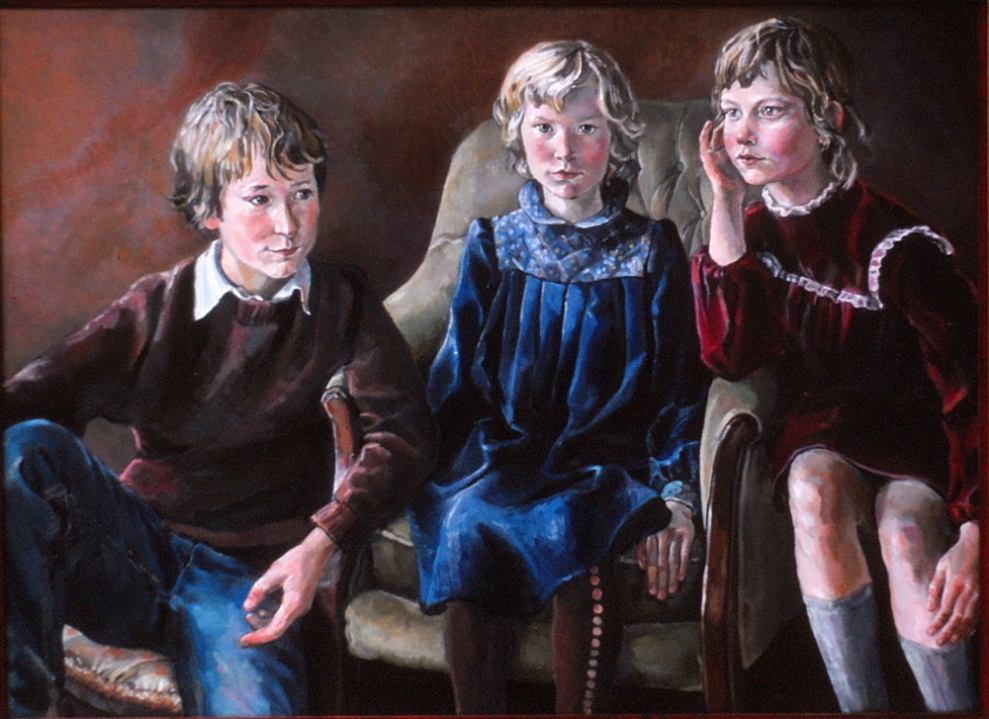 The Oates family, in Sussex.   These group portraits were ultimately rewarding, but very hard to get right.      They were done in situ, with the children being summoned one by one to sit;  we would chat;   photos were taken also, and the painting was carried back on the train and completed at home.

I travelled to the families, and set up my easel and gear, there.   A visiting artist makes an unusual close contact with a family and its heart.   Those were years of special confidences, and my anxious labour to do justice to them.

Orson Welles, from sketches and TV.   I was a fan of his.   The facial breadth and range of expression is a treasure trove for an artist – a big soul in a small painting – an ever changing human landscape.

Princess Alice of Gloucester – commissioned by the Royal Academy of Music (she was its patron) in 1977.   I took my baby daughter along to the sittings at Kensington Palace; she lay and kicked quite contentedly on the bottle-green carpet while I worked.   This pastel portrait hangs in the Royal Academy of Music, I think on the stairs.    HRH was quite tense as a sitter – longing to get out and garden:  posing is yet another long Royal job.   The camelias are fresh and splendid, near the jade box. 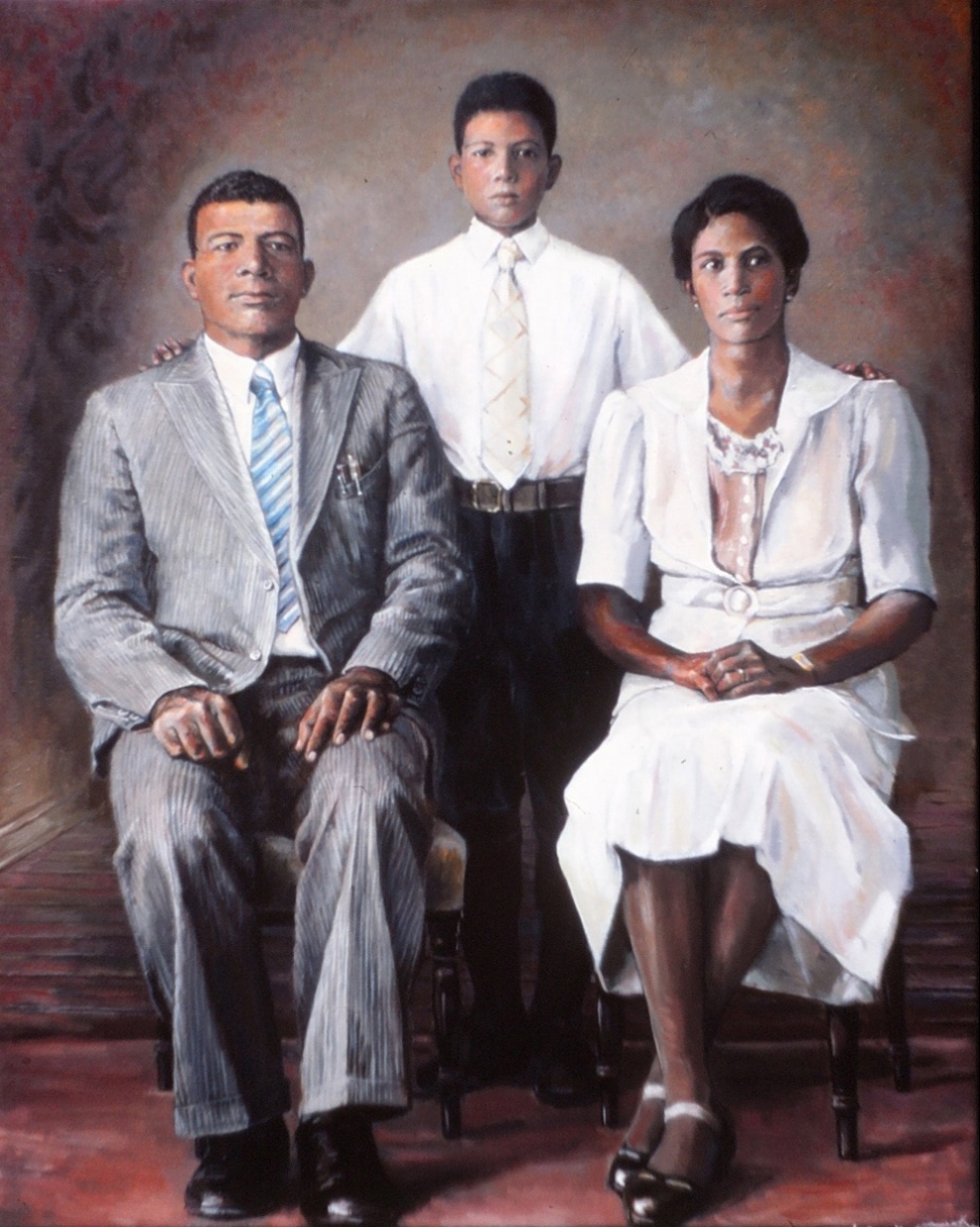 “Three Regal People” (1982) – an old Carribbean family, done from a small and aged sepia photo.   I am deeply drawn to ancestry and family trees;  the quality which shines consistently through the generations;  the history which these persons have with such dignity and pride, survived.   The son and heir became an arts administrator when he grew up, and helped me to network my portrait painting career.   Most unfortunately this painting got put into storage, and was destroyed in a fire.

This blog is  a vehicle to promote my published work – The Sacred India Tarot (with Rohit Arya, Yogi Impressions Books) and The Dreamer in the Dream – a collection of short stories (0 Books)

13 thoughts on “Portrait Gallery One: Father Kolbe, Princess Alice, and others”