This was written about 20 years ago, but it has been on my mind recently, especially with the upcoming of this link re bosen-higgs discovery: http://www.global-energy-parliament.net/research/official-statements

My thoughts on this were and are “intuitive” rather than “scientific”, and so they are on their way somewhere.

A Siva Sakti Yantra through the Tree

A medium whereby the universe is revealed to the senses.

What is science?  A language to evoke and describe the indescribable.  No language – in the domain of poet, musician or physicist – can do more than that,  or claim to be the fact.

Yet language moves, and is moved.

Creation, a New Moon, emerges like a child from the egg of darkness.  Wisdom gleams before it illumines.  Let there be Light, before there was light …  before the speed of Light scripted the universe.  “And there was Light” – Genesis – is the handwriting of space, time and mass, visible to the eye.  How it balloons over the aeons, right now and here.

Cosmic receptivity makes a breath on a mirror for the Primordial One to Behold One, Becoming One.   This is the design, the way we work.  What is the ATMA VICHARA? – the Enquiry of God.

Withdrawing into the roots, stem and flower of the lotus, is the centre of a concentric ripple radiating outward.  An infinite Centre emits signals of itself;  the genesis of a vacuum somewhere in an atom, simultaneously contracts and expands consciousness.

The still point, turning Rose;   where “the rose and the fire are One”

Any centre emitting a concentric signal, is a creation of Time.  Time moves around a circle.   The measurement of space measures no absolute space, for there is no such thing.   Measurement, language, time, are symbols.  The size of the 24 hour clock is the circumference of rotating Earth.  The size of the 12 month clock is the radial distance of Earth’s orbit around the Sun.  The size of my wristwatch catalyzes a conditioned mental connection:  a small and very confined space.

They are portions in space for the measurement of time.  Petals of “Time” flow from the centres of different sized clocks – geocentric, heliocentric and eccentric – as one phenomenon to describe arcs of space, or movement.  In that Centre, the wheel’s hub, is a point unmoved;  it has all directions, holds within it all time, space and things – turning everything.

It is a movie maker.

It is the eye of a cyclone moving over seas and lands, the I or Self unchanging.

A gleam of realization:  if I am a body or centre emitting rays of the speed of light, then it is I myself who travel – away from the emission – at the speed of light.  What moves and what is moved, is relative, through the universal constant 186,000-odd miles per second.

a bump in the river

Suppose I am a planet, a spherical plane or organization of space – a bump around which space is drawn into a gravitational eddy of time;  suppose I am this small round planet.   Light from a Sun, reflected from my surface, reaches some other surface in the cosmic deep, as a twinkle-little-star.

Suppose I am a little ball, hurled through cosmos.  A ray of light reaches me, traveling in the same direction.  I receive its impact at 186,000 miles per-second, just as I would if I stood stationary somewhere.  And if I am hurled through cosmos into collision with the beam of light, the impact is no greater than 186,000 miles per-second.   Nothing in the physical world can move faster than Light, than the photon-transformative interaction of Light.   If as a ball, I move at Light’s speed, I disappear and am Light.

Einstein drew measuring-rods which diminish and disappear as the speed of light is reached.  Who is the measuring rod?   Who is “I”?   Watch me shrink in length – any object travelling away, shrinks rapidly with perspective, and through time: a rod.  The speed of light is emitted from me;  I shrink to a point and less.   Nothing can happen beyond the speed of light, as far as we know.  The passage of time, the grains of salt through an hour-glass, the swing of a pendulum or journey around a dial, cannot travel faster than light.  If I ride a light-ray – a photonic interaction – I cannot age.  If I could, my aging process would overtake the speed of light.

Then how do I … the Self … exist?   How can my “sphurana” exist apart, as matter, as egg-on-my-face, as all things perishable?  My very existence vanishes and is yet “AM”.

“LIGHT is the top limiting velocity in the universe.”

Einstein said, “Common sense is nothing more than a deposit of prejudices laid down in the mind prior to the age of eighteen.”

Our common sense, or conditioned intellect, believes a rod maintains the same shape, size and process of decay, no matter how fast it travels.  The world of name and form is a congelation of the senses, a dial around the point.  Relative states belong, interwoven and alongside each other;  the whole is One, the only one I can conceive.

But in the sub-atomic world, velocity and near-velocity of light, back and forth across time, is the norm.  In the subatomic world where all states arise and dissolve into each other, the ancient non-dual knowledge of God is rooted:  Unity.  A particle may undergo the same change in spin as its twin, a billion years further than light travels in time.  The phenomenon in the dance is simultaneous.   In the Fourth dimension, these twin particles or types of manifestation, are One.   Space does not separate them;  so time cannot apply.

The particle which “bows to its Self” here and a billion miles distant, is “THAT I AM”.  The organic continuum or dance is beyond our lattice, beyond the texture of time and space.  Any change in its status defeats the speed of light, which is all we know.

Sri Chakra Yantra:  Chandra Jyotish – the deity of the Moon

The breath enters and leaves me, from the end of time – the ripple of the Immeasurable butterfly wing.

These things are perceived in intuitive wellbeing, and in mathematics.  They help to dissolve the rope of Karma, and so they are Reality.  They are both awesome and tender.  The flower grows through Earth’s membrane to the Sun because of them.

As no thing can happen beyond the speed of light, so space and time in human nature (through our five windows, the senses, the eyes) strains and exerts itself towards completion, relative to the Constant of Light.   In the relationship of effort and grace, space and time travel and suffer, buckle and zig-zag … but not the Light itself.   Space and time register friction.  We call the molecular friction distance, speed, polarity, competition, conflict, progress, day-and-night and structural interplay

Thus, our body – the planets, galaxies, the wondrous ballet of elliptic orbits and spirals – hurtles relative to the speed of light which “stands” absolutely still.  There is no position.  There is no motion, no bottom nor top, no beginning, no end.  Light reveals and re-veils.  Coagulations of mass are illusory.   See this in theory, and look into the subatomic heart where time dissolves in Siva’s dance, to and fro, as Shakti.

But if the Circle of Creation was perfect – as in the Spirit – the physical world would instantly disappear;  for the physical world is the music of asymmetry, of love and longing, stress and strife, geological time, thought-time, tick-tock time.  The planetary orbits are ellipses, with the nuclear focus off-centre;  likewise the left and right ventricles of the heart;  the Tao.   The world of the “common sense” is a perceptual wave-band.   Through the eyes of a Buddha or great sage, its spectrum appears quite narrow.

Ramana Maharshi used sometimes, when he looked at someone, to narrow his eyes deep into their being, changing every particle there within, opening it to love.

The realized One lives and is aware in the planes “above” and “below” the rainbow prism through which our world perceives the world.  He or she is the White Sun before it flowers into colour.  He or she handles the world’s octave in the instrument of being – there are many octaves above and below the infra-red to ultra-violet frequency.   The sage sees what is simultaneously NOT –  being the universally loving and Indifferent One, the impartial watch from Whom light is born. 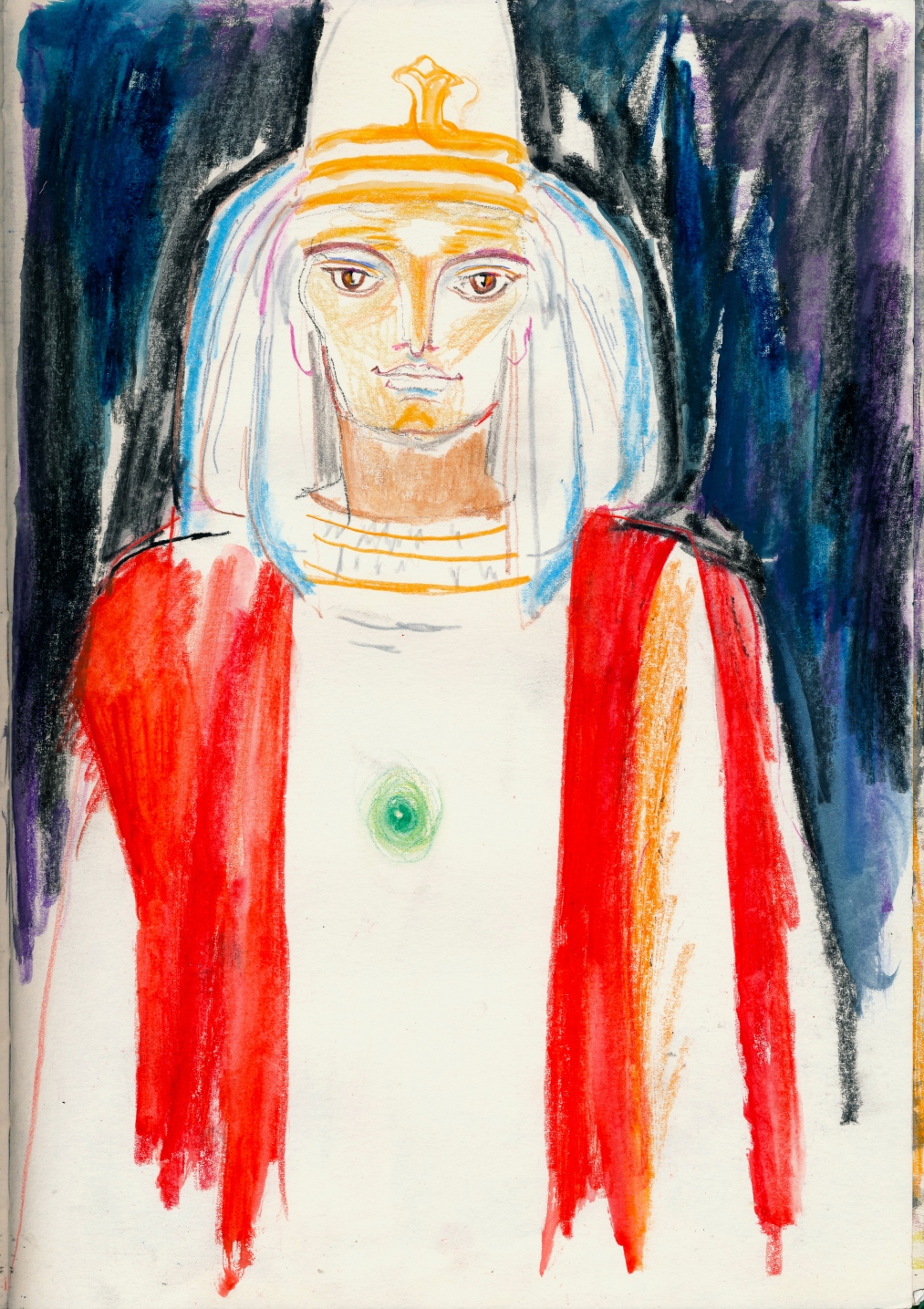 The realized One … within any of us! … is not an individual, but in “I”.  Her given shape is an outline around the I, like the mountain Arunachala around the flame of Siva.   “I” dissolve ever into the centre, into being all … who-quizzically.

Then hear this:  mass, the material world, is formed at the speed of Light at any point on the circumference of a circle whose centre is everywhere, its circumference no where.

“God is hidden in everything he creates, somewhat in the way that Light is contained in the innumerable reflections that produce a mirage.  The desert producing the mirage, represents the Void, or the Place of the world made by TsimTsum (contraction of the Divine into the flowering of manifestation).  The imperceptible screen on which appear the vanishing forms that lead the pilgrim astray, is pargod, the curtain or mirror of the Shekhinah (Holy Presence).” 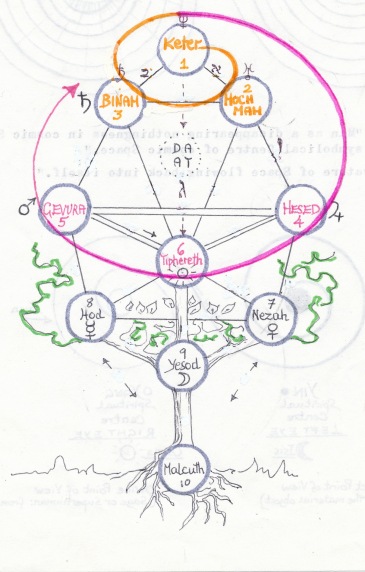 (Pargod is the Tapestry of our life and world, which the internet illustrates: a magic carpet incessantly Self extending.   Shekhinah is God’s bridal veil.   For Sufis, the life is a horizon tapestry or rug of woven, coloured wools:  Consciousness is the Thread itself, a pure white fleece before it is dyed:  the vertical plane through any point.)

The above passage from Leo Schaya’s The Universal Meaning of the Kabbalah parallels Ramana Maharshi’s analogy of the screen as the Self onto which are projected the ever-changing cinematic images of the world.  The moving picture plays upon the curtain – the pargod – Leo Schaya describes.  The Unchanging, onto which the world pictures are projected, is the Shekhinah, the Self or Brahman;  the Holy One, I AM.   TAT TVAM ASI – “That thou Art”.

The speed of light perceptible to the physical instrument as a Constant, is a pale echo of the Holy One’s effulgence.  For the speed of light, written throughout the Universe as signature, is not the scribe!

The seven hued rainbow spectrum is our earthling veil.  The White Sun as genesis, shines through the raindrop prism into the colours of our field: Sivaic fire, the waters, the Earth.

The cell to hold this fact, is silence.

It is borderless, and unbored.

The inner guru – the word means “dispeller of darkness” – is still.  The devotee is that movement, diving inward.

And life goes on … Ramana and Annamalai at work