THE SACRED INDIA TAROT:  CREATION OF THE TOWER CARD –

Siva destroys the Triple City with a single Arrow 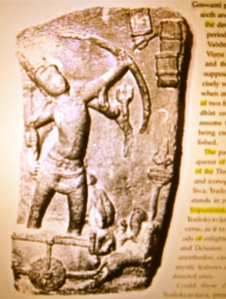 Our process material for this card is unusually scanty.  I can find no images sent by Rohit, there is just this small picture (above) which I found online.   There is not one word in my journal, about drawing Siva Tripurantaka.   It was done immediately after the Devil card – Mara and his Three Daughters.   It was difficult to compose (see Rohit’s notes, below) but satisfying to do.   Rohit’s archetypal interpretation penetrates the core of this Arcanum – the dismantling of falsehood, the revelation of Truth by a single arrow.

In the west, the Tower card has a bad reputation.  It suggests catastrophe, the snap of a tension build-up.   But when we look deeper, this card is also called the House of God, and the thunderbolt destroying the tower, is the Lightning Flash down the Tree of Life – from the Holy One to Earth.   The themes are awakening and speech –  from the Burning Bush to Moses – and it is ruled by Mars.   Enlightenment shocks.  A chrysalis cracks open to release the butterfly.  Eggs break for birds to hatch:  seeds in the ground dissolve to root and shoot.   Our food beaks down to release vital energy.   It is fitting that in the Sacred India Tarot, Siva the Creator-Destroyer rules this card. 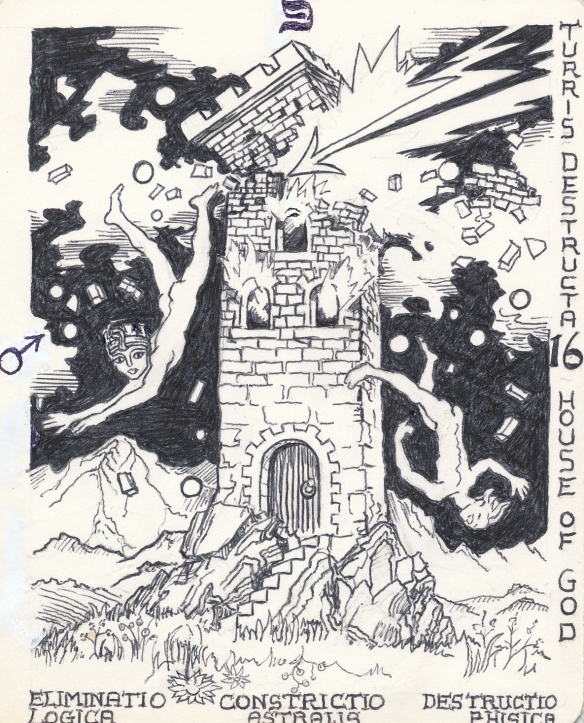 The sons of Taraka, who had been slain by Skanda, with great austerities regained their race’s domination over the universe.  They had three strongholds, floating cities from which they controlled the worlds.  One was of iron, another of silver, and the last of gold.  The boon granted them was that death would not come until their three cities were simultaneously destroyed by a single arrow.  The cities would align in one straight line only once every thousand years, and that too for a single instant.  Vishnu agreed to become the missile for this venture, but all his strength would be taken up in destroying the cities.  Somebody with greater strength had to shoot him at the precise moment and impart this Will into the flight, so that the divine missile could crash into the Tripura.

Siva took on himself the combined strengths of the gods, for only then could Vishnu be launched – it needed that much power.  This earned him the name of Mahadeva, the Great god, for he could bear the burden of the powers of all the gods, without collapsing.  Brahma drove the chariot, and at the fateful moment when the cities aligned, the Great god let fly, and the three cities and most of their inhabitants were smashed out of their flying security.

This will be somewhat of a challenge to depict, as the traditional sculpture focuses on the dominant figure of the Great Siva Mahadeva releasing the arrow.  The cities themselves are shown in a corner, if at all – as the act of the god, not the destruction, is deemed significant.

Since the Tower is about the smashing down of the negative and irrelevant, the pompous and pretentious, we need to focus on the cities.  I would suggest we keep Siva in the picture, as we do not want to lost the positive energy that brings.  We can have him upon his chariot, in the classic posture of having released the arrow (who is Vishnu/thunderbolt) in the lower left hand corner of the card.  We can show the three demon cities made respectively of gold, silver and iron, aligned in a dead straight line in space, and being devastated as the arrow smashes through them.

That will mean the line of action in the card will be from lower left corner to upper right corner, with the destruction of the cities in the middle and upper two-thirds of the card.  We can show the cities blowing apart, on fire and so on, whatever seems dramatic.  The iron city is black, the silver city comes next, and on top is the golden city.  In the upper section of the card, which may be somewhat vacant because of the manner in which the action unfolds, we can show a human figure riding away on a bull.  This was a demon devotee of Siva saved by Nandi.

In fact this cosmic bull and rider figure conveyed to me the release of Taurean stability after destroying that unstable demonic investment.   I sensed the astrological aeon;  a unique alignment within our present era, through a “tipping point”.   Ten years ago, iin 2002, the stock market was still on a crazy roll.  Sooner or later, a crash was inevitable, falling to a level of reality-based securities (the Bull again.)

Our Tower in the west is split by a lightning flash from heaven to earth.  Siva’s Tower – his bow-shot – opens up the heavens from below.

The Tower is a profound alchemic symbol of transformation by heat.   Towers and turrets proliferate in alchemical art.  It is also called athanor, meaning furnace or oven.

My journal does record:  “On 21 September, an earthquake turned over Britain’s sleep, about 1AM – ten kilometers deep, a shift of plates, as happens here once a decade or so, to about 4.8 on the richter scale.  It heaved, and tension released.  There are many more earthquakes in Britain than I realized.  I didn’t feel a thing, but tremors were noticed in N E London.  The epicenter was Birmingham – it has a big rock under it;  London has an artesian well.  The reports are not of waves, as in my recent earthquake dreams, but a juddering sort of vibration.   It threw a few persons out of bed, damaged some buildings and cut power lines.

“Kabbalistically:  British fault-lines are DEEP down in the subconscious, under the ground.  Their quakes make less surface disturbance than more sensitive zones elsewhere.

“There is tension all over the country, against what the government wants to do in Iraq.”

“The rise of energy through the card is wonderful.  It’s exceedingly dynamic, and we are very happy with it as it is.”

These verses on Siva’s Destruction of the Three Cities, were first drafted by Alan Jacobs in about 1992.  Jane revised them recently, and added a few details:

In the late summer of 2002, we all lived in the shadow of the twin towers.  But in my experience, conscious work along this path – the path of the Tarot Tower – has almost invariably – and unexpectedly – revealed my inner Guru – dispeller of darkness.   Communications open!

2 thoughts on “Sacred India Tarot – Creation of the Tower”