In this post I want to clarify what I learned with spiritual organizations:  but first, to get into my stride …

Journal:  I posted my final Coastal Path instalment after two days work, and was very spent.   I felt my writing in it is a bit pompous, and trimmed it.  But  I did my first new sketches of Ramana. This felt wonderful.  I need to learn him again … approach the mountain’s grandeur and beauty with my caricature.

The Coastal Path was a BOOK of catalyst, now published here in full. Today, my daughter’s photo of the strata change – (downward tilt to the sea, with Pembroke coast in the background) – shows the view (see previous post.)   On the “organ pipes” (above to the left, and out of frame) is where the revelation happened in my dream afterwards.  It is told in With Ramana & Krishnamurti (3) on the Coastal Path. The devil whispered a “conspiracy of doubt-versus-certainty” over the good firm rock, everywhere.

In Ramana’s vichara, the living shape coming up from the deep – as I tinkered with charcoal towards it –  is a private bhakti to lean back into:  his eyes, humour, industry, stillness and dry Capricorn flavour  …  Capricorn-Cancer, along his midheaven axis of eclipse: the elder as the child of humanity.

It is rich, ochre-brown and wonderful, like southern sandalwood with honeyed milk poured over it.  Western symbolism adds the wealth and paradox of the 15th Tarot Key, which is ruled by Capricorn.  The lesson in this Key discriminates the Effigy and the Real … “separate the subtle from the gross, Earth from the fire, acting with prudence, humility and good judgement” (Emerald Table).

The devil said (traditionally) “Give me a sage, and I will organize him for you.”

Artists have this productive trouble. 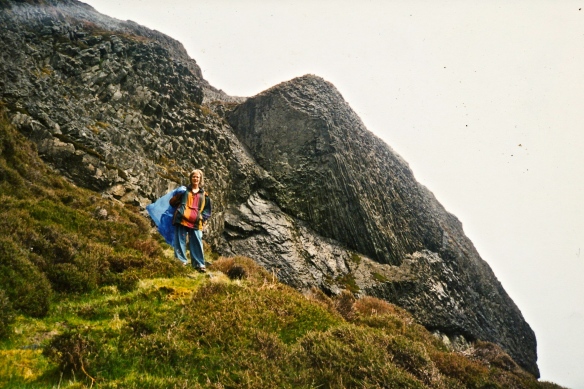 However, as dear AJ told me when I first met him, we know the rock is sound, on this step up.  Ultimately,  the depth where Ramana links and is our consciousness, is a safeguard from delusion.   In private, he is  “Bhagavan”.  In public however, the bhagavan becomes a facile  label, an imposition on ignorance.  A little knowledge is a dangerous thing –  it degenerates into advertisement.   Bhagavan – used accurately –  is a name of God, of light, of care, moving spontaneously.  How can I say “God” unless I glimpse the limitless cosmic connectivity?   To say “God” the tiny seed of life must split open and die.

Theoretically my whole life renews Ramana like a mountain spring, and feels easier for it;  but the bhakti Kabbalist current behaves in its own way, regardless.   In the morning I “part the waves and kiss the lips”;  later on, the bhakti subsides, as the fog comes down the hill.

Moses went up to the light and came down with the stone.  It is the high, holy day of Atonement.  At one.

What is bhakti (the way of devotion) truly?  It is attentiveness.   It is like the small burns or hill-brooks on Eigg – up near their source I part the heather and bracken to see the dark water gleam.

Ramana’s Indian silence is the sea inside the wave.  Let it fill veins and vessels like salt:  the  buoyancy.  The scent of sandal paste:  the hard, dark wood or stone of sivalinga over which they pour the offering:  the ananda at the root of the breath.  The young Ganapati Muni climbs up the hill and finds his sage. 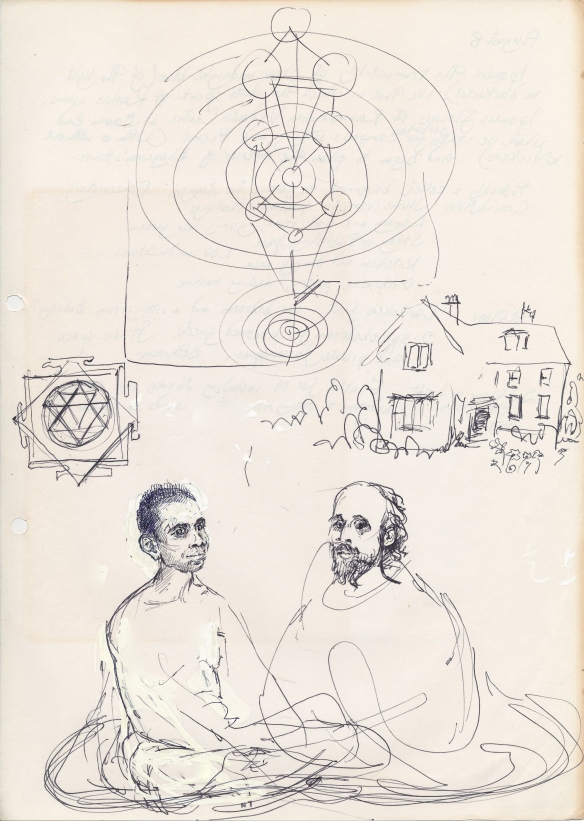 Early sketch of the Muni meeting Ramana.  However, there were also my wishes and requirements – to “magick a Ramana Centre” (house for us) – the same old story, using the props.  The house didn’t happen, we couldn’t raise the money, and I went on living where I am now, and so did AJ in general.   The spiritual home is centred within:  it is uncluttered by props, walls, admin or mortgage.  The truth ensures just enough material support:  no surplus. 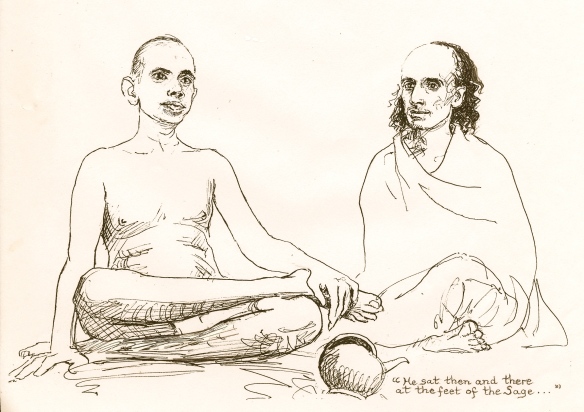 The young Ramana and Ganapati

At this point, I searched for some correspondence relating to my inflated Inner Twit – the years of my high profile in the Ramana Foundation.  In about 1996, a  friend mirrored back to me his distress, how I was acting out, all over the place.  I can’t find his letter now – a pity, because it was salutary, it hurt and I was furious; but it stopped me.  In brief – wherever he looked, there was jane standing in front of Ramana, her gush, her ideas, her pictures.  Seeing this through his eyes, was a shock.  I was very cross with him, but I began to dismantle my “satsang personality” and withdaw.  She couldn’t survive being “exposed”.  She wants to be everywhere, manage everything and count everybody. 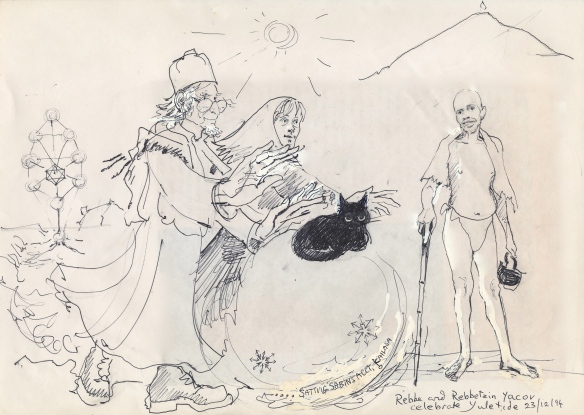 Yet she knows, and knew from the beginning, that Ramana’s Self-enquiry dissolves adherents back into itself.   Circles of Satsang form, and form more circles;  but from the flower, the petals isolate, grow brittle and die off, as the Self keeps flowering.

I was spiritually arrogant.  It is only a step from this, psychologically, to Sheela on the ranch planning to eliminate persons who don’t toe the line;  in the guru-organizing mindset, however mild and apparently “british”, this tendency roosts, and full blown, becomes a monster.   I wrote screeds about the teaching, and I was dishonest.

Spiritual vasanas are powerful, as we observe in contemporary religious excess.  The personal ego when juiced up by spirituality or a magnetic sage, is an accelerated BULLDOZER, subconsciously driven, entrenched in righteous belief, and working out its issues full time. 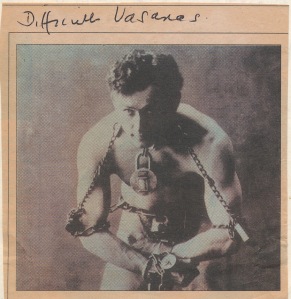 Paradoxically, the sage who is clarity gets projected onto fog around his followers.  Annamalai’s book Living by the Words of Bhagavan (1994) recorded with painful honesty, the ashram buzz around the well – the troubles and jealousies of all those sadhaks, thrown into high relief by Ramana’s presence among them.  The light casts our strong shadows, the ones desiring Consciousness.    Ramana used to say – he had no alternative – “It must come up and out.”   He was an agent provocateur, as all great teachers are.

I am left with a deep distaste for spiritual organizations and “inner circles”.  The glamour tendencies in myself are nowadays short lived, they run aground, the energy dies.  They are mastered by a deeper Conscience than my surface.  This life-time’s Karmic lesson applied equally to my love-life.   The understanding when it burnt my fingers, is total!   My flow with the Kabbalahsociety is unbroken … 24 years now … because of its transparency.  The management of Kabbalahsociety – Companions of the Light –  is minimal, light on the ground, and therefore efficient.

Our ideal for the Ramana Foundation UK was transparency and no baggage.  That is how it turned out to be, and is today.  It runs itself, by companions.

Spirituality and identity with spiritual organizations is an easy cover-up, for wishes which are selfish.  Genuine esoteric teaching advises us to become thoroughly acquainted and insightful with our own desire nature – “what I want” – the elementary principle to bring to light and master.   To master the racehorse, we must ride it … by the sea. 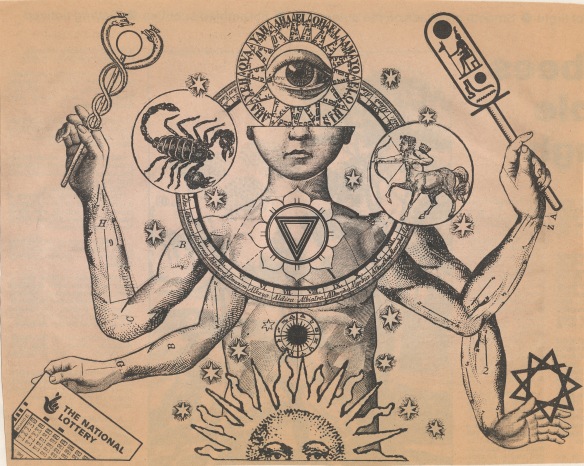 Thinking of my daughter also – her depression in her teens, having to contend with Mum in full zeal.  I was blind.  It made her vulnerable.  She lived with the goings-on in our house, and was neglected.  Given the smallest encouragement, I praised and preened her own achievements and I am proud of her, and meant it, but it came out hollow and grey and did her no good.  No wonder I still feel guilty and disabled, when we discuss spiritual tools.

Probably my spiritual obsessions deepened her shadow.  She understood what I was going on about, but didn’t need the rattle.  By her compassion and strength of character, she found her own way through, and continues to.

There – that is what I wished to say.  I am a solitary type, on the fringes of Ramana community, and others.   I learned much, from “managing” RMF UK etc upfront, until a friend’s criticism and disgust reached me.  Those learning curves hurt, but were valuable.

Nobody is enlightened.  Enlightenment spreading around the Earth, comes and finds where our soil is fertile, and plants its seed.  Wind blows, rain comes, sun shines, darkness enters, light goes forth. 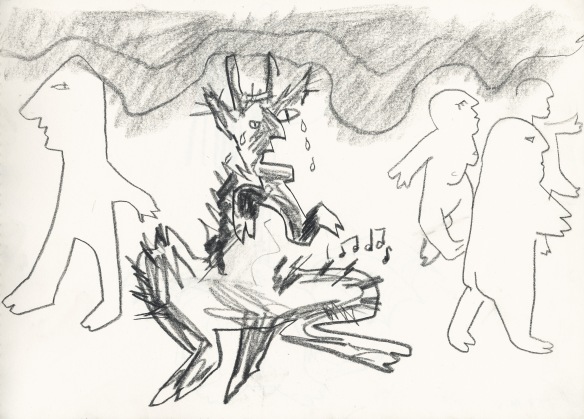 I don’t write much about the Shadow.  I do try to describe my insights through it.  The Shadow is easy to access and dramatise, and is more than adequately seen to;  I have my own job to do.  It came through my very real valley of the Shadow.   It put me through the wringer … shudder!   There is no regret, because it was a thorough Shield and Buckler.   I understand spiritual, emotional and physical addiction. 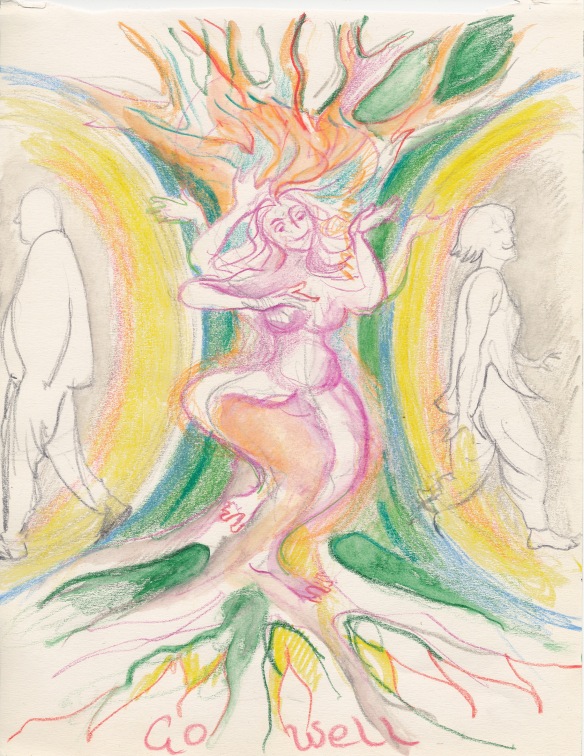 jiva, jlva – an attempt to cut ties and heal a relationship calvary

Today when the meditative current up-wells, it is of the source, and I call it BENEVOL:  the will-to-good.   In the Yoga Vasishta, the demons of havoc concentrated so hard on themselves, that Brahma’s aeons in due course transmuted them to cosmic bhakti, their true nature.  They all in time dissolved into ramanas:  Siva the dance of light – they couldn’t help it.  The name Ramana – (given by Ganapati Muni, master of mantras) – is: “who sports in the Self”.

Brahma and Vishnu are an interwoven cosmic maintenance:  Siva the disposition. 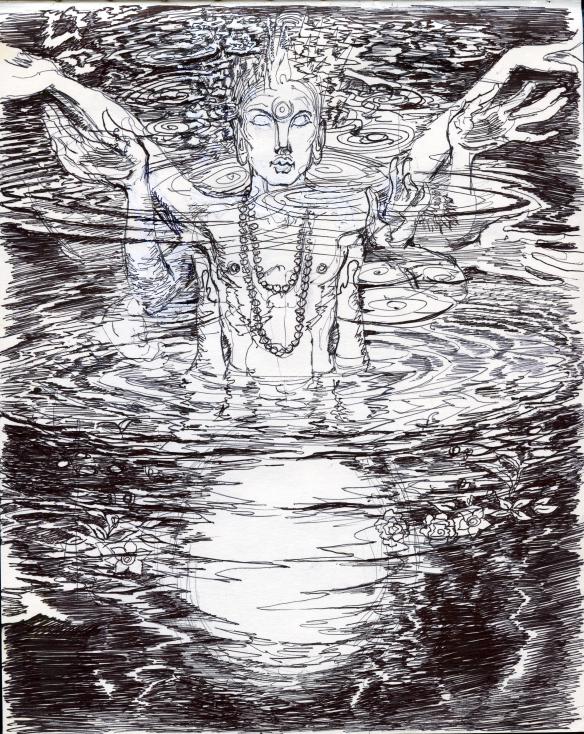 The Yoga Vasishta demons were hard little mischievous pins in fantastic yogic contortion on their mountain tops.  Their intense egotistic tapas generated an awful fracas through the worlds. There is One way ultimately, for all thoughts, all processes, pollution, politics, geologies and fantastic things:  to realise the Self.  Nothing can escape or contravene that Law… the awe of consciousness.  It makes us work on ourselves.  We only believe the effort is ours because we are still nine-tenths asleep.

Just the littlest bit – homeopathically –  is awake, enough to “keep calm and carry on.”  It is from our evolution as a whole, the whole “eye”, and at present incomplete.

These thoughts contain Kabbalist references to Hesed (benevol) and the path of awe, as well.  Where the yogas of east and west meet, the east is bhakti, the west is analytical; both are applied psychology, and complement each other.  The eastern psychology in the Tantras, Puranas, Ayurveda and Jyotish (the science of light) is profound and accurately mapped.  There is no flab or fatalism in the sages of the dawn or in the Tao.  Perhaps it takes a western mindset  – where the sun’s lotus sets, turning rose – to fully appreciate.

We need to be a little culturally detached, in order to see.

Thus the hands touch and join;  thus the Bridge.

This post is not as planned.  I had not planned to write one at all.

Following my mother on Eigg, with “belvies”

“The Law of Adonai is other than the laws of men, for into the laws of men has entered confusion.  This must be, since mankind remains a work unfinished.  Yet be on guard, you who seek to be numbered among the sons and daughters of the true Israel, lest you mistake the half-formed concepts of an earlier stage of growth, for final truths.

“The Great Work directs itself always towards the building of the Temple of Adonai, and in its early stages there are needs that do not continue throughout the building process.  Yet men mistake the scaffolding for the building itself, and thus pay idolatrous reverence to old rules which have no longer any useful purpose.  Watch therefore, O ye who would rule as the Lord rules, lest you usurp the rights of Adonai!”

1 thought on “On Spiritual Organizations”