A word of explanation may be helpful for readers of today’s previous post “Dove”, which mentions Brean Down.  I am a fan of Dion Fortune’s novels, (which she wrote to complement her books on Qabalah) – particularly The Sea Priestess and Moon Magic.

Tarot priestess of the Moon, with pomegranates, 2003

The Sea Priestess‘s setting is the landscape around Brean Down in north Somerset, near the Mendip hills.  Dion Fortune grew up in that region.  I also know it quite well.  In the novel, a temple to Isis is built and consecrated at the end of Brean.  The landscape is telescoped through interior astral vision, with Glastonbury Tor brought much closer to the sea – as indeed it was at one time.   From either of these eminences today, the subtle curve connecting them, can be discerned.

Dion Fortune founded the Society of the Inner Light at Glastonbury in the 1920s and 30s, parallel to Paul Foster Case’s Builders of the Adytum in the States.  Both, in their own ways, set out to regenerate and evolve the rituals and teachings of the Golden Dawn, for the new dispensation.   They made them more practical, with an informed psychology as the under-carriage.  Paul Foster Case was a gifted musician and writer on Rosicrucan and masonic themes.  He received the ground-plan for the Builders through his direct contact with a great Master of the Inner School.

Dion Fortune was a trance medium.  She and her colleagues “brought through” the maggidim (inner plane teachers) of the Society of the Inner Light.   Gareth Knight became an active member of the Society in 1953 after her death, and particularly since 1998.  His biography of her and the School gives a vivid account of this process, and of the way the esoteric community has moved with the times. Much more is accessible to us, than at the beginning of the 20th century, when the work was heavily veiled.   This is due to the global emergency:  an acceleration of the inner process.  Many souls incarnate nowadays, who are already fully trained.  The trend is to simplify, and ground the practice.

Here is my sketch of Glastonbury Tor with the mudras (hand gestures or signs) which the Inner School revealed to Dion Fortune, while she was in trance:

I use these gestures in a fluid motion, when invoking the Tree of Life.  The Tor has a spiral path to its summit, and a small stone tower. The tower is drawn as a vesica, forming a chalice, with an astral “stone circle” around it.   In the tower is a window, whose broken silhouette suggested to me a winged being.

In this sequence of drawings – done during a period when I was learning to perceive and portray the inner plane maggidim – is the following pair:  the first in 1988.  The second is the same, updated, about the Fool, the King of Swords and the Priestess.  I worked with these archetypes for a long time before I really got going on the Tarot.  The Fool is the adventurous seeker.   The King’s psychological reactions …

… defend his terrain, and the well, in which the Priestess rises to the bait.   The globe in which the Fool travels, is in perpendicular dimension to the well, for the Fool has no concern with time:  the King is the guardian of the in-between.  The house is the soul, and the libra-sign over the Cup is equilibrium.   The shorthand was based on a very early Tarot reading, which showed me my path for years to come.   In 2003, I re-drew the scene:

… the King keeps his crown, but has turned into a Rosy Cross;  the grain is sprouting.

Now here is the Great Sphinx …

… as I imagined he may have looked, before the face was shot away.

For sketches of Dion Fortune, see my 15 September post On Power and the Dragon’s Tale. 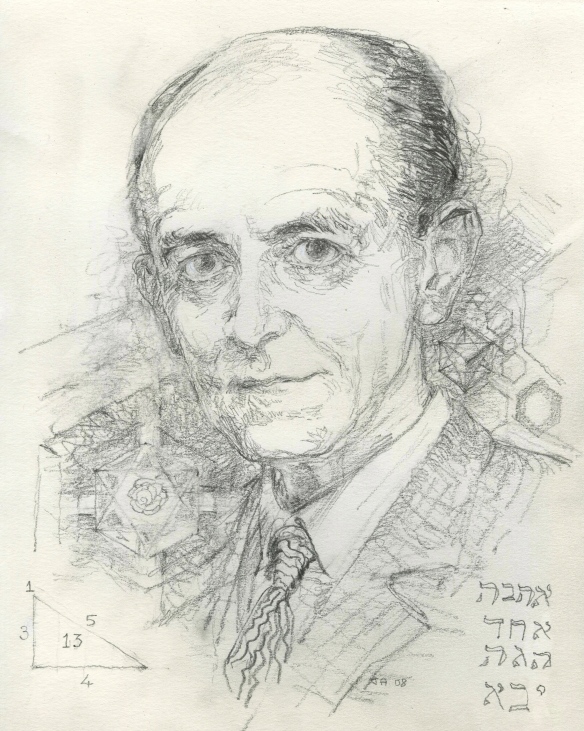