Relationships, persons and childhood memories are teachers and things of beauty – a  treasure that goes higher and deeper than any mainstream art collection.  They remind me to handle life, each detail, tenderly.

This letter from my father today, enclosing photo cutting:  he was 90 earlier this month –  another mountain goat …

“Herewith the Wrestlers.  I had forgotten how much I loved this on the wall;  I suppose I lived with it a very long time both at Manor Farm and at Pitt, and it was well hung both places.  This is rather a good photograph showing the relief very clearly, and those three wonderfully related lines of the shoulders and head of the upper man. 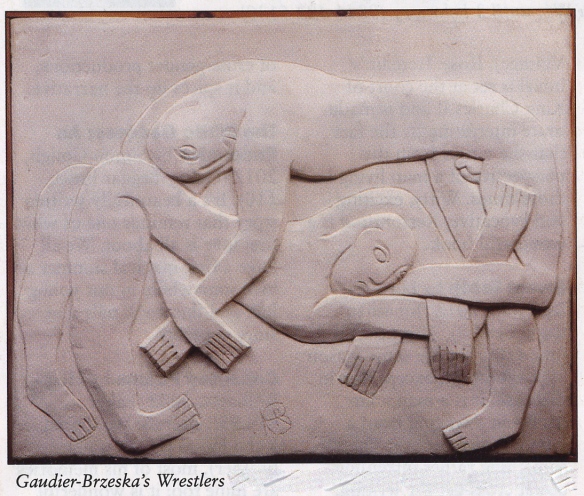 “Thinking of speaking of Buddhism with you last night, of course discovering it while we were in Cornwall and Limpsfield was my first intimation of another reality beyond or within the mud and tears, and so was very exciting.  I grew up of course as an R.C., becoming disillusioned as a teenager, into a totally uninterested agnostic through the War.

“It was talking with Louis Adene in Mevagissy, and hearing about Gurdjieff and Ouspensky that awakened me to another possibility, and I automatically joined the Buddhists in London, and then the thunder-clap of Krishnamurti.  That became the real sign-post, and so these last years I wade about listening to all sorts of voices, but always as much as I can, just paying attention – allowing attention to be – on what is happening now.

“Yesterday was a fine cold winter’s day.  Today it is cold raining, and all the gutters rattling.  I have just been reading about the vast energies positive and negative of the Universe which cancel each other out, so that in fact nothing is happening ! 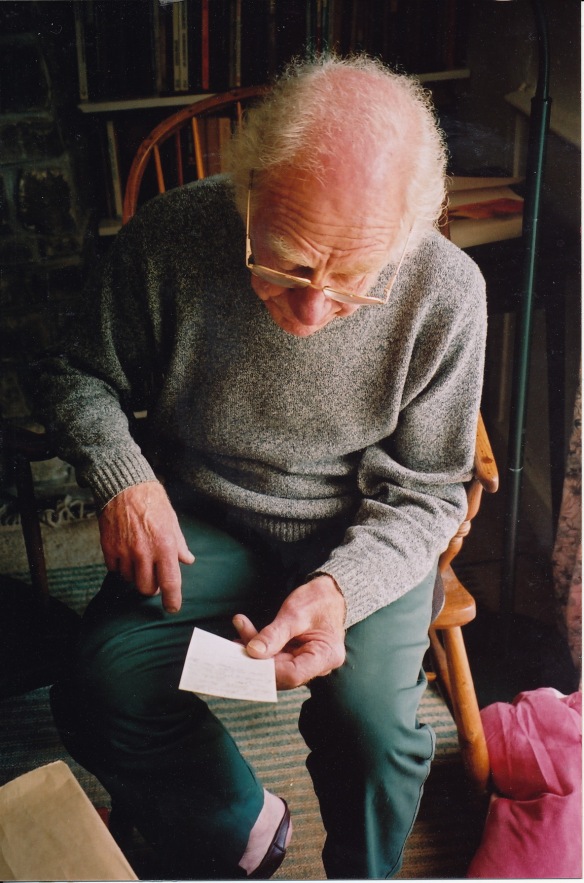 When I was 6 we lived in Cornwall near Caerhays, where I fell deeply in love with flowers and jewels.  My father was managing a farm which belonged to a teutonic tyrant called Mr Strauss.  We had to move after two years, because Mr Strauss wanted to cut down all the trees.  My father climbed to the top of a beautiful oak and sat there defiantly.  Nowadays there are more trees in southern Cornwall than ever before.

Herbert Read (whom my parents knew when we were living on the North Yorkshire moors) introduced him to a circle of Cornish artists, poets and free thinkers – Lionel Miskin (his oldest friend), Louis Adene (who lived in a wood near Gorran Haven), the Fussels and Derek Savage.   At the same time, he discussed Buddhism with my maternal grandmother in their letters.  My mother thought it was rather droll – but at least it made him happier.  As a young man, he was shell shocked from the War, very passionate, and of uncertain temper.   Probably he suffered from traumatic stress, which no one recognised in those days.  He stoically brought up his family, farmed – he was a pioneer in the return to organic farming – played the violin, and wrestled his spiritual path.   We moved house six times before I was ten, and in each house a “monastery” was set aside with a rolled up blanket for him to sit quietly.

When my father was 70 he caught a dangerous illness from swimming in a French river.  As he convalesced, each breath came to him as a jewel, a mystery beyond knowledge.   Since that time of nearly dying, he is much more serene.  The pressure of trying to be “enlightened” now, once and for all, fell away.  He didn’t call it “enlightenment”, and I don’t  like that word, either.  He called it “to be a human”, and still does.

My mother’s father, Jim Ede, gave us a cast of Gaudier’s The Wrestlers.  It weighed a ton and used to hang above my parents’ bed like a guardian angel.  I grew up with it, and it influenced my drawing.  Last year it was sold, and is now on its travels.  The photo above was taken at an exhibition “1913: the Shape of Time” at the Henry Moore Institute in Leeds, where it is on show until 17 February.

Here are The Wrestlers in my father’s old house: 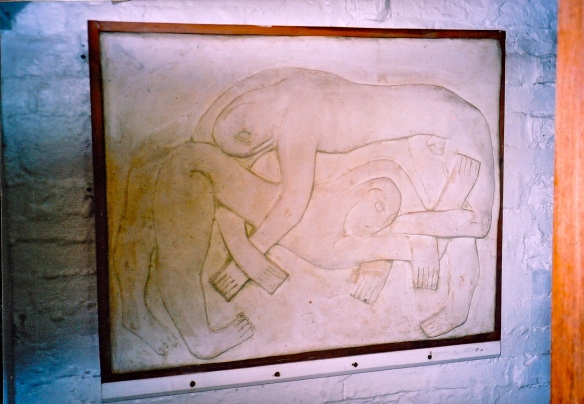 His letter trips a wave and starts a wing!  Before Cornwall, we lived on a large sheep farm in Bransdale on the Yorkshire moors. 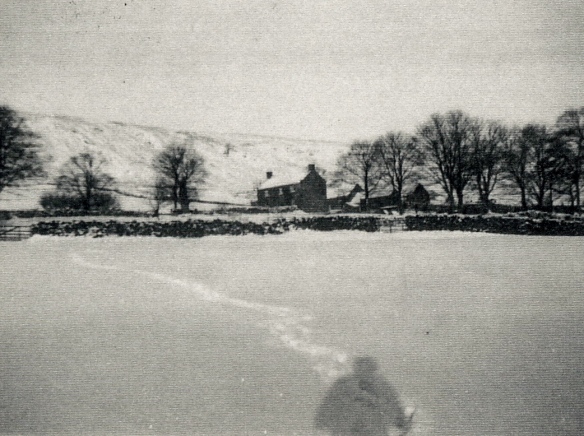 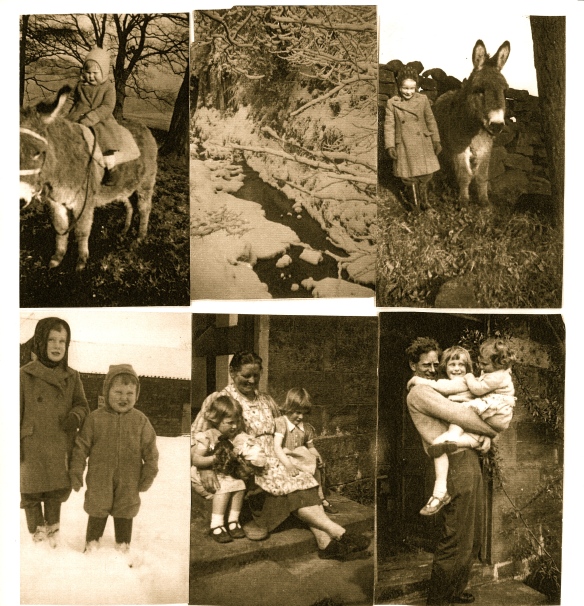 Mrs Coseira (with me and my sister) was a Polish woman who came in to help my mother. She was very pious, and she couldn’t bear to look at the Wrestlers, and always averted her eyes when she went in my parents’ room.   The donkey was called Daniel.  He had a job at Scarborough by the sea, and he was having a holiday with us, from all his hard work during the summer.  I remember the warm smell of the sack my mother tied round his middle for us to ride, and the deep crunch of the snow;  and my sister’s “hattacoatatrousers”.

In Bransdale I began to draw.  My mother made big drawing books out of cheap lining paper, unrolling, folding, cutting and stitching them with coloured darning wool.  As fast as she made them, I filled them, drawing for up to eight hours a day.  She said we would need a second removals van to carry them all, but she kept the three best books, and I have them still.  Here are a few favourites:

Fingaloo and Fart with balloons 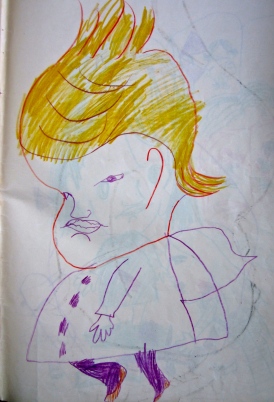 two girls to a party

… and a Cornish garden.  We moved from Yorkshire (which was very remote) to Cornwall because I had to go to school;  and there in Redruth my brother was born.  In those days, the china-clay-pit pyramids glistened along the spine of Cornwall like an alpine range, constantly changing with the light.

Finally, my two favourite alchemical engravings from Alexander Roob’s Alchemy & Mysticism.   Hermes is coming through the Great Sea, carrying carefully the world and the serpents;  he is the quicksilver, and the little cubes hidden in every part of nature are the golden prittvi, ineffable treasure in each atom of the earth of life. 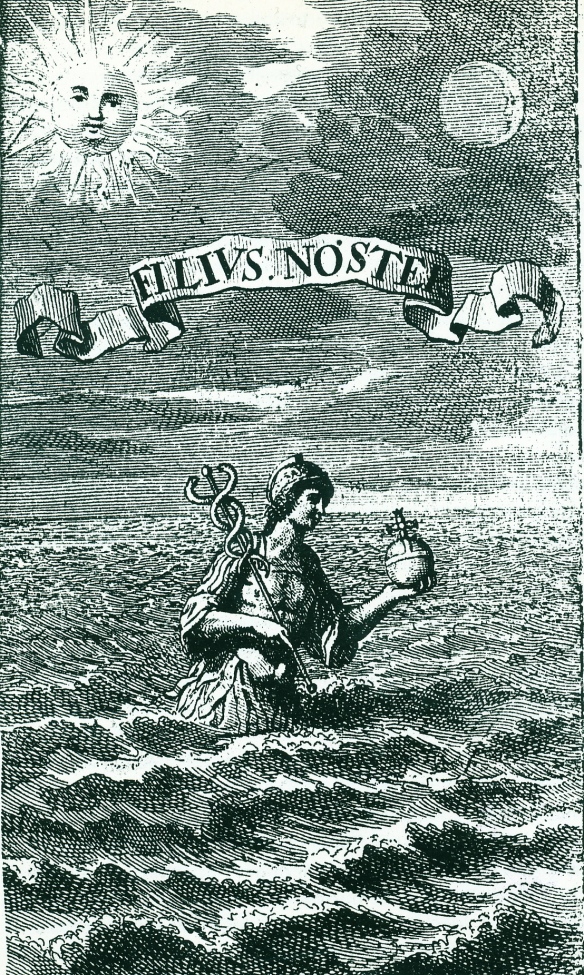 The source material for the lapis can be found everywhere: in the earth, on the mountains, in the air and in the nourishing water. M.Maier, Atlalanta fugiens, Oppenheim 1618 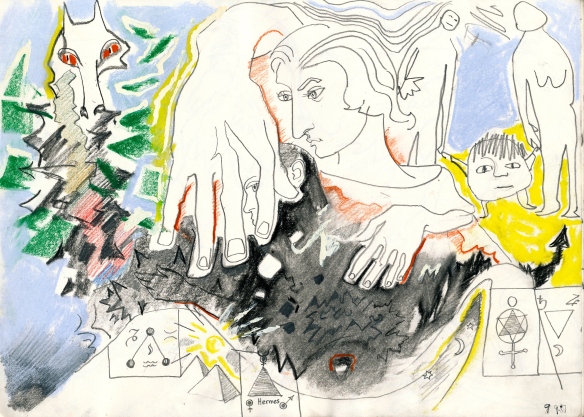 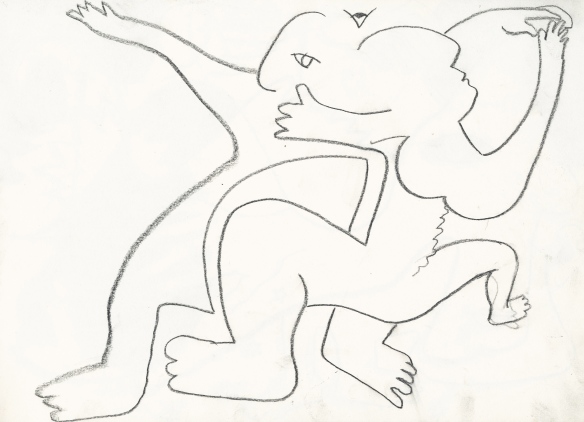 Who are the Wrestlers?

Jacob’s angel meets us on the ladder, the Tree of Life.

It is the following day:  I have to add a bit more, because my father tends to drop timely messages in my box..  When I rang him just now to thank him for sending the Wrestlers photo, he said, “Listen to this.  Last night I was told – I had to get out of bed and find my glasses and go to my desk and write it down – I was told by a Voice, very clearly – “I am … You are … a particle-ar expressing of the Universal energy.  There is no separation.”

Then he reminded me, he joined a London buddhist Sangha back in 1957 or so, when we were living in Surrey.  He went to the Sangha leader, tense with questions about enlightenment and how to live.  The Sangha leader had a little room with nothing in it at all. He sat in his robe, looked up and said, “The Past is Over.  The Future has not come yet.  The Present is Now.  DO NOT WASTE IT”.

It aligns with the way the light leads through to Light, this year.   It is unmistakable – but we have to work at noticing it.

Here’s a photo of him with my mother, taken in the Lake District about 15 years ago:

7 thoughts on “The Wrestlers”