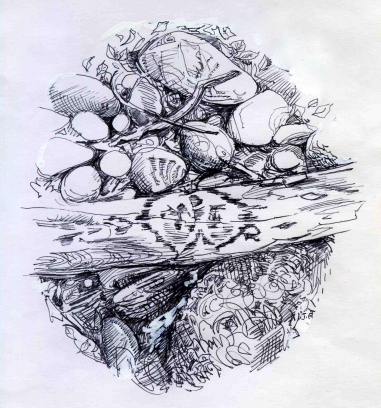 “Seven of Lotuses is an interesting episode, because Parvati used to break her tapasya every day, to care for trees in her vicinity, and was criticized for being frivolous in so doing.  She quoted back a Vedic verse which says that the most sacred and meritorious of all acts is to serve trees!  This break was also part of her Sadhana.

“The normal spirit associated with the Star card is what we are seeking here.  Trees near a lotus pond will do.” 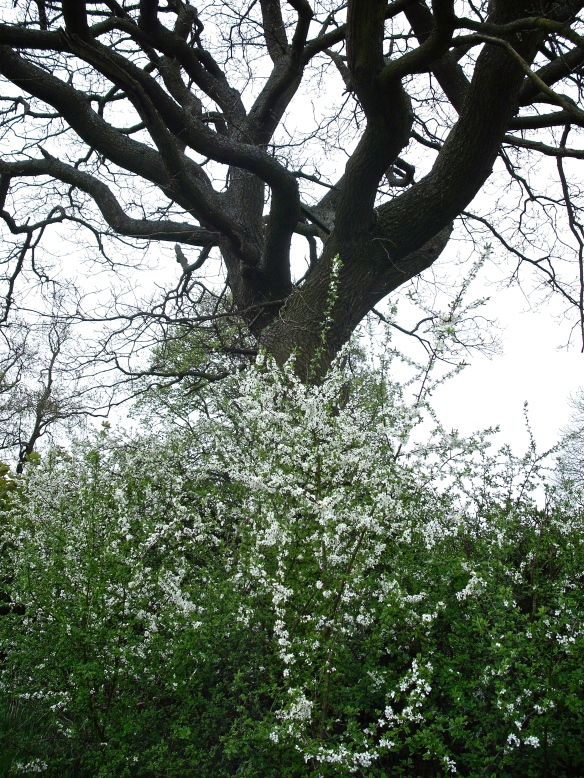 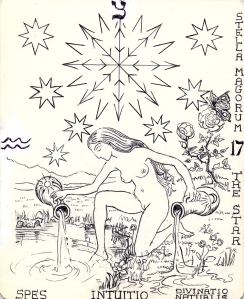 Parvati waters trees!   In the Major Arcanum 17 image, she is mother naked, truth, and she pours from flasks of infinite supply, onto the ground and into the starry pool, seeking and being her knowledge.

With the same water of Life, Parvati in the Himalayan forest, replenishes the upward flowing sap and photosynthesis – the inverted root.  Each forest giant is Siva, and she moves among them like the dew;  the heat and smell and sweat of earth, the stirrings of insects and wild deer.   She dips her cloth in the water, and wraps it around her, to cool herself.

Parvati’s sadhana and service contained these tremendous contrasts:  the ultimate snows, the fiery dance of her Lord, and the lush grandeur of Himalayan valleys.

As Rohit has pointed out, after the terrible shock and humiliation of Kama being destroyed, her passion is like a little girl, convinced that a happy and magical outcome is in her power.  For is it not her destiny to be the Mother of the world?

As Mother Ganga descends from the Himalayan watershed, Sati reborn as Parvati is the consciousness:  and she awaits Him by the waters, with all the time in the world. 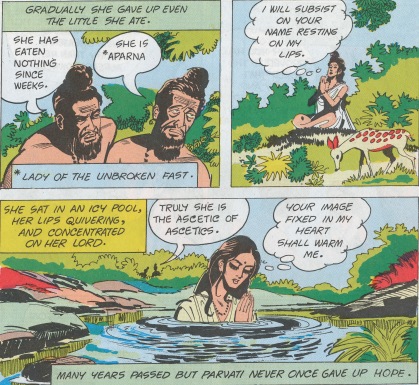 Visual reference from the cartoon-book, for Seven of Lotuses

Indeed, the tapas and self-starvation of the young Daughter of the Himalaya Mountains, richly nourished her daydreams – which every Indian Princess has – of family life with Lord Siva and their children Skanda and Ganapati, on Mount Kailas … 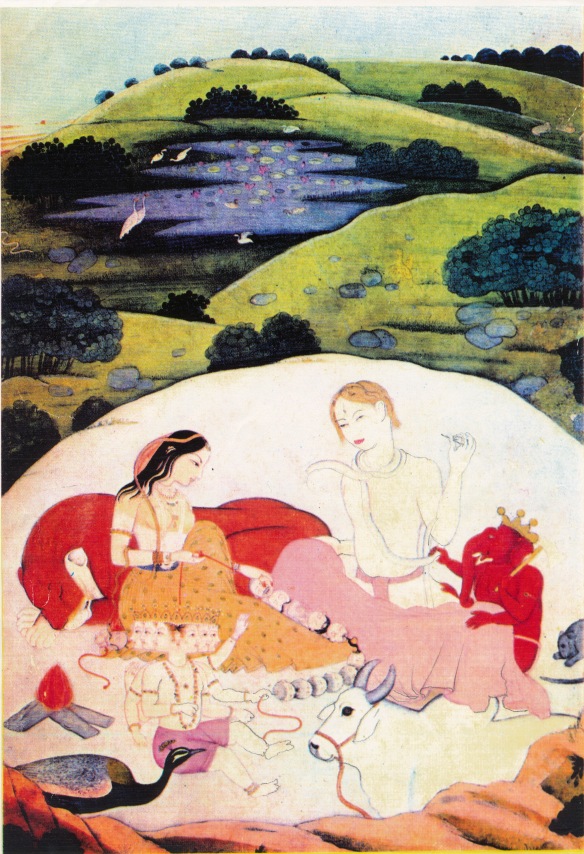 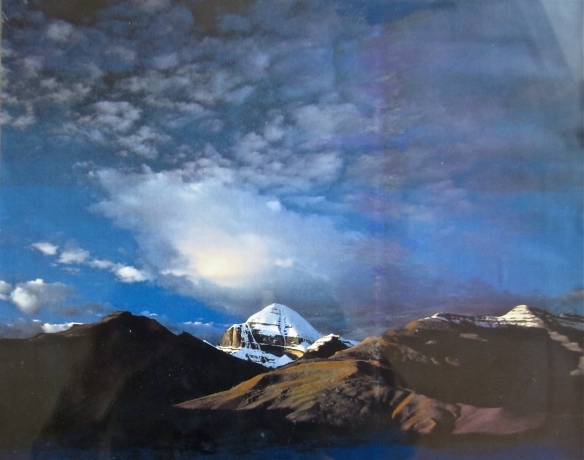 A  Kabbalist experience of the Self, yet Sivaic …

Something similar to this (below) may have shone through Parvati’s dreams. Just such a moment influences an entire life.   We all have them;  but do we notice them?

1991:  “I dreamed I or someone had an injury, a toxic swelling on the left leg, near the ankle.  The person lay on, or was part of a piece of furniture or framework, in a garden out of doors, and suffered from a lack of equilibrium.  With my growing interest in healing, a strange knowledge entered me.   I lifted this swollen point or part of space.  I let it collide with a point of vitality which I brought to meet it over the wooden frame, from the other side.  From the marrying spilled an incandescent throbbing.  It was not of my body;  it was the air:  the point everywhere, of Reality.    For those endless instants, I knew and I am the infinite Source.

“Nothing can end or destroy the Source, the seamless thrill of being.   A mountain range, a Himalaya of crystal light sparkles in the nucleus of every atom and in my hinterland.  It calls me.  It is an ancient Song which I cannot lose.   It will be always, as it always has been, home and living with my grandmother.  It has no beginning.

“It is as it fades, my uttermost and lingering refreshment.   It is the truth.  It flowered, it happened in the air.  And the sick leg was naturally being cured.

“The creative act collides the particles.  It explodes their unsought energy.   Their interaction is more profoundly alive than any sum of the parts.   It is at position or motion.  It moves as a wave of light.  The hidden languages of adepts were built on verbs – motion – and not upon nouns – position.

“The interaction or “change” appears anywhere, at any moment over the cosmic lattice.

“In the ripple effect even a thousand light years distant, the mysterious brother or sister particle concurs.  It answers the continuum, through the veil of time and space.  An electron’s observable behaviours are pieces in cross-section of Reality.   An electron is a charged unit of life or change.  The quanta vanish and reappear beyond the Script of Light, in every place of time.  The living being is beyond sight and touch;  yet I breathe it through my nose.  Fragmentary planes across the limbs, appear in our elemental lattice – we add them together to make a sum or experiment for prediction.  But when they touch, the bucket’s bottom drops out.  A few parts of the electron memory and the way it feels, return through the veil.  The whole of I is this for ever.   The three-dimensional lattice is my dream, outlining the shadow.   The living being is in the wheels Ezekiel saw in the desert near Tel Aviv.

“Ezekiel recounted four simultaneous likenesses (to lion, eagle, angel, bull) in four directions squared through space at the speed of light.  On the chariot, four spherical wheels, one for each creature ‘went in any of their four directions without turning as they went … and when the living creatures rose from the earth the wheels rose … for the spirit of the living creatures was in the wheels.’  Above this was a boundless crystal firmament – their point.  In this stood still  ‘the likeness of the Glory of the LORD ‘  –  axis of all the worlds.

“In the I-dot of each grain of space, I am the echo of that crystalline brightness Ezekiel calls ‘of a gleaming chrysolite‘ – my age old peaks, the mountains.

“Crystal is pure composition.  Handling or friction of crystals releases the current.  Crystal in the minerals and geological strata of Earth resembles the  Angelic Laws.  Crystalline and unadorned is this.”

Here now is the completed card:   Parvati waters the Trees. 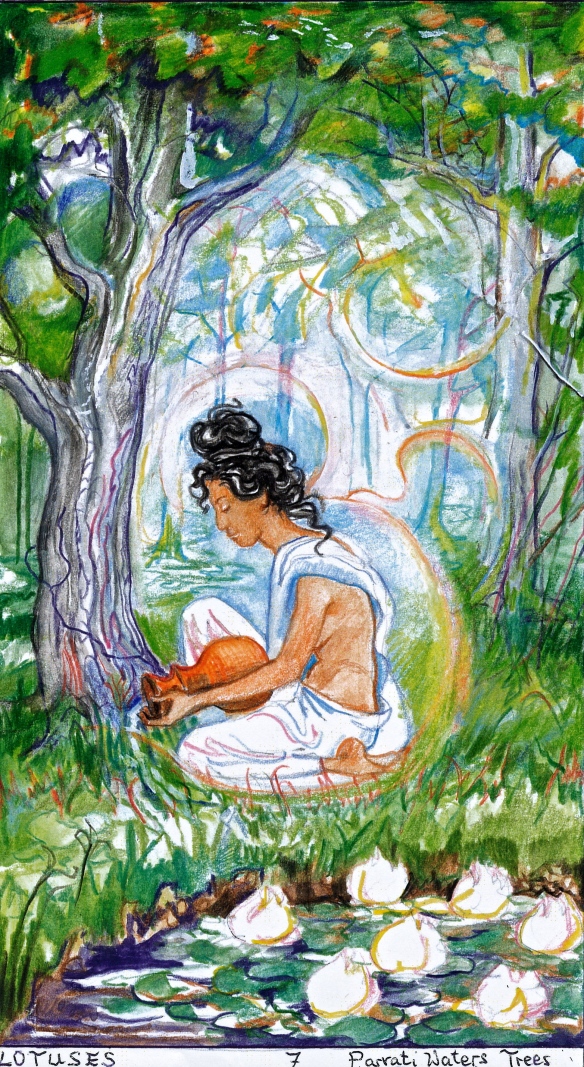 The aura Omkara around Parvati recalls the green Kundalini in 2 of Lotuses,  as she fell at the feet of the sage Narada who brought her the news.

Correspondence Jane to Gautam & Rohit – 31 October 2004:  “As enclosed – and  thanks for sending Garuda images.”

Rohit to Jane:   “Both the eight” (see next SITA post) “and the seven are cards that leave us no room for comment.  They are terrific and beautiful.  It was a very pleasant surprise to see Kailas in the 8, as Gautam was going to send you a picture reference of the same to incorporate somewhere in the suit.  I think that we should switch characters of Kama and Pradyumna for King and Knight, as Pradyumna is the healed person, and Kama is still immature.” 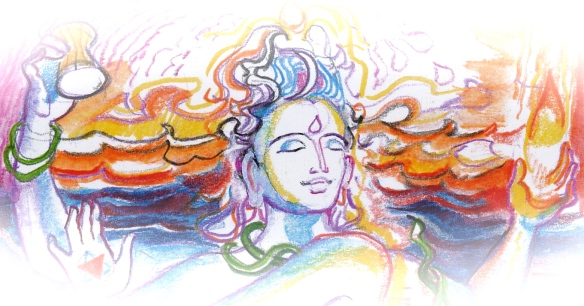 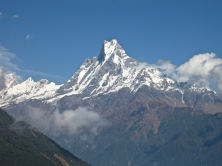 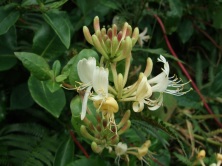 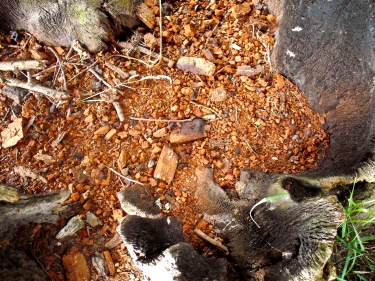 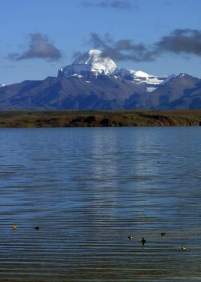 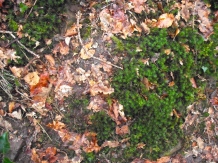 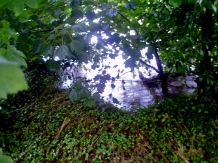 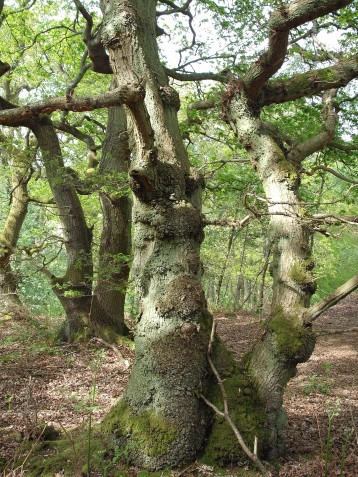 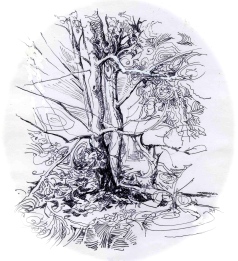 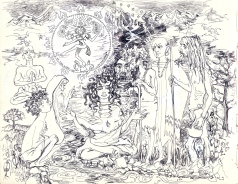 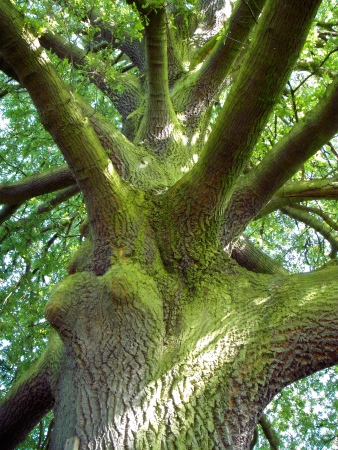 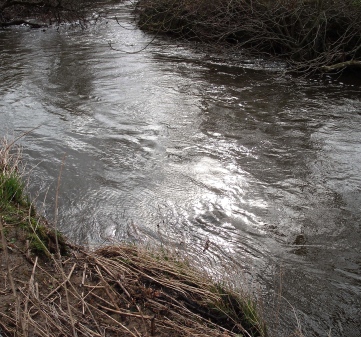 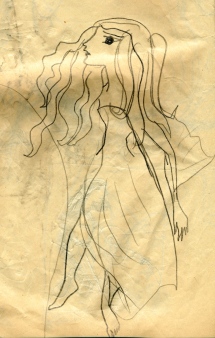 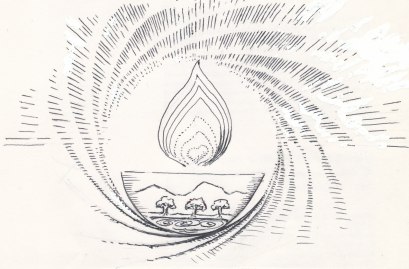 For other Sacred India Tarot posts, look under Recent Posts, Categories in side bar, or Archive of All Posts in the title bar.