A winged book – an open one – is like just discovering someone. I don’t know their face yet.

The caterpillar butterfly transition – see Rohit’s blog in previous post – is for most of us a magical archetype.  It has a ripple effect.  Sure enough, the following morning I opened Wilhelm/Jung’s translation of The Secret of the Golden Flower – an elder Taoist alchemy – and there rose up from it … something with wings!

In The Secret of the Golden Flower, it says:

Self enquiry is beyond and antecedes the polar differences.  How often do I practice?   Rarely.  But it is here for the point.

And “When men are set free from the womb, the primordial spirit dwells in the square inch between the eyes;  but the Conscious spirit dwells below, in the heart.  This lower fleshly heart has the shape of a large peach.  It is covered by the wings of the lungs, supported by the liver, and served by the bowels.

“This heart is dependent on the outside world.  If a man does not eat for one day even, it feels extremely uncomfortable.  If it hears something terrifying it throbs;  if it hears something enraging it stops; if it is faced with death it becomes sad;  if it sees something beautiful it is dazzled.

“But the Heavenly Heart in the head, when would it have been in the least moved?  Do you ask, Can the Heavenly Heart not be moved?  Then I answer, How could the true thought in the square inch (between the eyes) be moved?  If it really moves, it is not well.  For when ordinary men die, then it moves, but this is not good.  It is best indeed if the Light has already fortified itself in a spirit body, and its life-force gradually penetrated the instincts and movements.”

Now as the vast bulk of human beings are NOT set free from the womb of Gaia, we are in strife to overcome Her and get out.   We have no peace with our mother because we are confined to toils of fate, field and enclosure.  And so we make war and poison her soils and seas, restricting ourselves to toxic building sites.  My royal we – note – passes the buck unconsciously ! 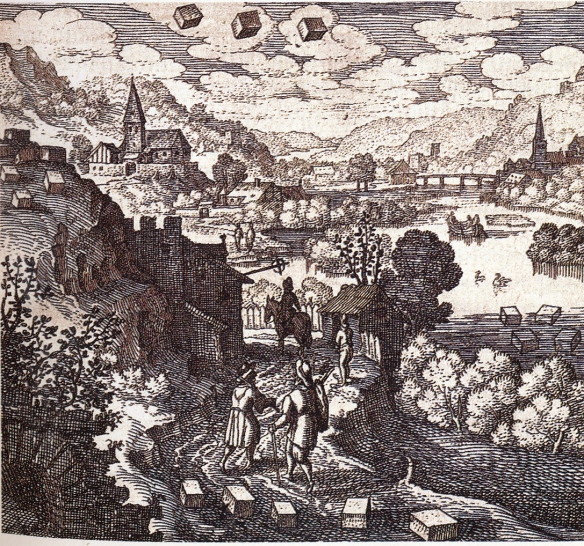 An illustration from Roob’s Alchemy & Mysticism, of how the cubes crystallise our land, like salt

The Hebrew word for “Discover” (as applied to First Matter in alchemy) is a verb GALAH.   This is related to “to lay bare, to denude, to strip of concealment, to reveal the secret” and “to open a book”.  The first letter, GIMEL relates to the Priestess who holds an open book or scroll. 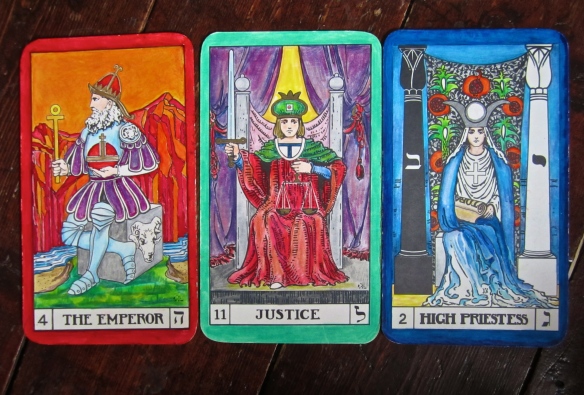 The second letter, L (Lamed) is the card of Karmic Justice or equilibrium.  The third letter H (Heh) symbolizes clear sight.   More of this, in my next post.  At the moment my thought is drawn to the Welsh hills.

The further upstream I go, by VOLONTA, the more open and bare the landscape, as in mid Wales.   Seek the opening, the well, each morning.   How?  Through a little being dazzled by the Beauty.  No emotion or state of consciousness belongs to me.   It is as I become on arrival.   When I am dazzled I am consumed:  and the flame enters the fire.

What am I inside and what am I outside of?   Conditioned building sites are the trap and fate of many souls.  But being both within and outside the Cube of space is a liberated way. 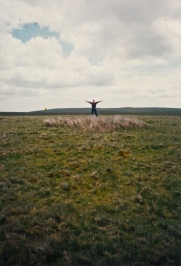 The Peach with Wings in the Golden Flower is delightful.  Lungs are great pulsing shimmering wings, propelling me along, beating sometimes fast and sometimes slow.   The Peach with Wings is the Solar head of the Caduceus.   The Wings are like the fins of a great fish-ray in the waters, with their millions of vessels and little sacs, all concordant like a murmuration of starlings.   A peach is the Fruit of Life … sometimes an apple, which serpents like to present to curvy ladies.   Watching the breath should be done lovingly, in wonder, the picture language and sense of taste.   The jewel-case opens with a sensuous flow of images.   A winged peach does what Yoga teaches. 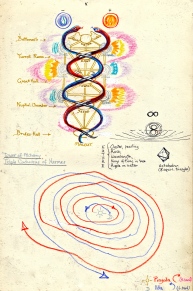 The lower spiral was drawn with both hands simulataneously, right and left brain crossing over. Quite an exercise! 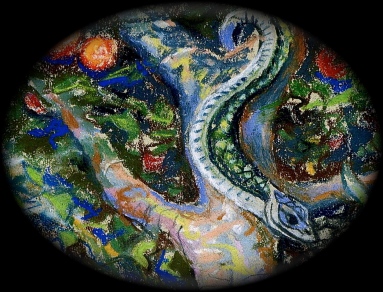 detail from “Adam and Eve after Cranach”

Detail from “Hermes Trismegistos in Alexandria

Detail from SITA Queen of Wands

A new winged staff of Hermes. The chakras are coloured in the Queen-scale. Prana is drawn down into the root; simultaneously the lotus ascends.

2 thoughts on “The Winged Peach”