Tarot probes the depth of the light and shadow of human experience and memory.  Otherwise it would fail as an oracle.

The Tarot’s suit of Swords suggests the masculine – the Father’s sorrow:  or as Wilfrid Owen wrote – the pity of war.   Yet the underlying theme of these two Sacred India Tarot cards (3 and 4 of Arrows) is GRIEF.  It suggests a man or woman’s feminine capacity to receive and express our grief, which is human, collective, and bottomless …  and so to heal.   I feel it is important to face and examine this:  to mirror the Father’s sorrow.

Remember the Mahabharath, the epic on which this Suit is based, depicts a massive civil war – including the Bhagavad Gita jewel of wisdom among the carnage.

For my own illustrations to this post, I am drawn today to Picasso’s Guernica:  the Spanish civil war bombs which slaughtered women, children and livestock – the screams of wounded horses:  the deranged bull, the all seeing light-bulb.   It is curious that in a past holocaust of my own, I dreamed and drew a Foal, whose parent had perished in a kind of astral Guernica.

“A glum looking Shantanu skulking in a corner, because the father of the young fisher girl he desires refuses to let her marry the old King when an energetic crown prince is alive, to ensure she can never become a Queen Mother.

“Bheeshma should be shown in consultation with a courtier who explains the reason for his father’s sorrow.

“‘Sorrow’ is the name of the card, and it is doubly ironic , because the sorrow he seeks to rid his father of, will end up becoming HIS sorrow.  In the sense that the Three of Arrows (swords) predicts impending sorrow and heartache, this card fits marvelously into the mythic structure of the story.

“Bheeshma is a young adult now.  Three arrows he could be holding in his hand, or else one shaft pointed in interrogation towards his father, another pointing ‘unconsciously’ to his heart, and a third fallen on the floor.”

Visual reference from comic book, for 3 of Arrows card

From Rohit’s Book with the Deck:

“Shantanu, king of Hastinapur, has fallen in love with a captivating fisher-girl, Satyavati.  She exudes a fragrance of musk, a boon granted earlier by an infatuated Rishi so that she would agree to bear him a spiritually great child, Vyasa.

“Shantanu (Bheeshma’s father) falls violently in love, as men approaching old age are apt to do, but the girl’s father was chief of the fisher folk, and a wily old coot.  He argued that his daughter would be little better than a concubine, since the throne would go to the young Bheeshma.  His price for the nuptials was that Devavratha be barred from the throne, and the children of Satyavati become the heirs.

“Shantanu was appalled at this turn of events, and refused, but his agonies of thwarted sexual desire and consequent gloom threatened to consume him.

“Bheeshma questioned the senior minister and extracted the true cause of his father’s decline.  A respected elder writhing within the pincers of lust and obsession is a demoralizing spectacle.  Bheeshma is going to take a calamitous decision to please his father, and the arrows he holds pierce heart, mind and soul.  The sorrow he seeks to rid his father of, is going to become HIS sorrow, and indeed of the history of his nation….

“Insight – release all of it – it was just clutter choking off your life energy.  Conversely – ‘the sped arrow returns not to the bow.’

“The arrows he holds pierce heart, mind and soul.”

Now, here is my meditation on the subject.

From my journal this morning:

I shall illustrate my post on 3 and 4 of Arrows with a couple of Picasso’s Guernica sketches, and the Tree Yakshi drawing.   Maybe even the Foal.  Swords blocking Ganga.  Then it will all be visual, and I shall need to write only very little.   Grief so acutely personal and bottomless, has to remain private, to publish it at all.   My “Pitraffic” drawing in 1954, is indeed its expression.   Grief is named, but as befalls and befits us all, it is Nameless.

As sharp for instance as mine, is Abdul’s for his people.  Honour, connect, sustain objectively, and cleanse with the grief.  It is pure.  It purifies.

The mother wails and keens even now:  the tremors.   I just see and am this Arabian woman rending black veils, the stab of inconsolable grief.   It is all through my body.   It is what we see in the civil war on TV, and we cannot stand it.

GRIEF IS SHARP SWORDS DOWN INTO THE DEEP WELL.

Grief is incredibly connecting.  Childhood has it, through the parental antennae.  Grownup reaches down into it, through her masques and evasions and hurts, and finds the deep element;  any story or argument about it, disappears.   Humanity shares grief as the profound measure of our race.  From grief bursts forth our song:  Gita. 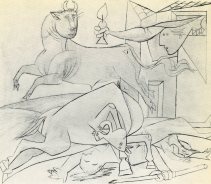 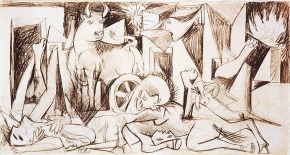 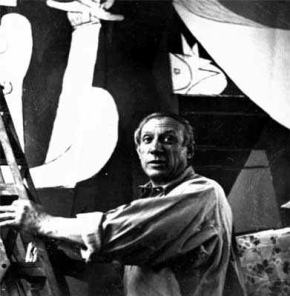 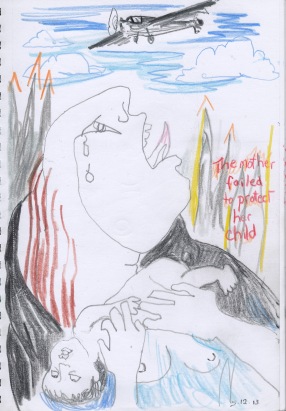 Since my early childhood, Picasso’s drawings made a powerful impression.

And grief and bereavement when completely allowed and touched, becomes calm.  It converts anger and violence and tension to compassion. There can be no confusion of grief with self-pity.   Grief transmutes to serenity.   The more of us who individually salvage our grief from the deep mine, and are conscious here – the better for humanworld as a whole.

So we self-cleanse the well, for the waters to become sweet, for all to drink:  as in Christ’s parables.

I wrote about the Arabian woman just now, as the breath from that arose so sharp.

I am repeating here, this illustration – the Ace of Arrows.  I think this is what happens when we block or dramatize our grief.   When feelings are suppressed or distorted, war breaks out.

“Since he is going to take a decision to rid his father of whatever it is that troubles him, and since this card has a strong meditative aspect to it, Bheeshma should be depicted brooding over the problem to his dojo.

“To depict him in meditative seclusion within a grid of four arrows, should not be difficult.”

Ramdev meditates at his island off the Scottish coast

Noble Kingship includes the Yogi:  meditation.  I have included this photo – kumarsushilkumar.wordpress.com because I love the symbolism of the fiery male meditator and the feminine well, which mirrors him and unites the soul … with a celtic tower in the background.   Bheeshma represents thought and the trials of conscience.

I was actually looking for these:

From Rohit’s Book with the Deck:

“The young Bheeshma has withdrawn into meditative seclusion, seeking a solution to his father’s conundrum.  While it is true that he could have accepted King Shantanu’s silence about the situation, the cultural imperative requires children to fulfil the desires and longings of parents …

“For Bheeshma, his father is still King, and the King’s welfare linked to the well being of the state, transcends individual aspirations and ambitions … His personal duty to his parent fulfilled, he is, despite the best of intentions, about to fail his society.  The road to hell is paved with good intentions, and sometimes the most measured, mulled over, ponderous ratiocination can be as erroneous as the hastiest of conclusions.

“This card is called ‘The Meditator’, so its presence is an indication to begin or deepen a spiritual practice of Sadhana.  Heightened mystical sensibility – seek the answers within:  vigilant thinking … Recuperation, convalescence and rejuvenation … wise expenditure … A summons to return to the fray;  enough thinking already.

“… Or:  going into exile, into disgrace or on strike … growth that is warped or stunted, momentum interrupted, a puncture or tear in the creative fabric …Isolation and discontent.

“What is not receiving adequate thought on your part?  What are you overlooking as potential consequences?

“I like the fact that all cards have captured the atmosphere inherent within the Air/Sword suit, of imminent menace and vague sense of sorrow and trouble rushing forward to you.  The atmosphere is very broody and suits the Bheeshma character very well.

“So from a psychological point of view, we are off to a terrific start.  The suit seems to have captured the underlying essence of turbulence and tribulation in an uncanny manner.

“I also like the meditating Bheeshma very much;  it is from a point of view of truth, the best Four of Arrows/Swords I have ever seen.

“There are a couple of points, though.  Bheeshma is perhaps not muscular enough – he looks like a Bruce Lee type of strong man.  To pull on his kind of bow would require muscular overdevelopment, like Conan the Barbarian in Marvel Comics.  This was mentioned in the instructions for Card 1.

“Gautam explained that there was some reason for not representing the suit in the dance form of Indonesia or Bali.  That is a great pity, because I really wanted to give an international flavour to the pack, not regiment it or limit it to merely Indian forms of representation.

“The epics too are really international stories, intellectual property of the world;  and Indonesia/Bali has some of the best Hindu art in the world, which was why I was keen on it.

“The Prince looks, I don’t know, slightly financially strapped.  Could we add some pate armour or jewels to his chest or arms, so that the inherent splendour of what he was going to give up, comes out stronger?  This looks austere.

“The Buddha suit was perfect in conveying the level of luxury he enjoyed.

“But overall, as I said, the psychological accuracy and impact of the suit till now, is remarkable’”

For other Sacred India Tarot posts, look under Recent Posts, Search, or Archive of All Posts in the title bar.

All art and creative writing in this blog is copyright © Janeadamsart 2012-2013. May not be used for commercial purposes. May be used and shared for non-commercial means with credit to Jane Adams and a link to the web address https://janeadamsart.wordpress.com/

6 thoughts on “Sacred India Tarot Archive – Creation of 3 & 4 of Arrows: the Father’s Sorrow”