Continuing this series from the Sacred India Tarot Archive, the creation of Two of Staves – it is extraordinary what may befall an intellectual and spiritual giant who wears too many hats.

Rohit Arya’s Notes – 2003
“Three of Wands/Staves – Ravana rejects good counsel.  The illustration is good enough to serve as the basic template, except that Ravana is to look angrier.  He does not realise that finally he has found somebody who has the strength and ability to stand up to him, something his counsellors realise only too well, but he is still banking on past glory to see him through.  The three wands could be three flaming torches that illumine the scene.”

Rohit’s remarks on the hubris that can overwhelm the spiritually gifted are so interesting, that I quote them here, in full:

From Rohit’s Book on the Deck
“Ravana, a shape-shifting sorcerer, manifests his fearsome, ten-headed, many-armed form in his outrage.  He has been truthfully told that Rama and his army are invincible, but he dislikes such honesty.  He has been the greatest warrior of the age, the very gods have submitted to his power, and the entire universe pays tribute to Lanka.  Never has such power and glory been seen in the world.  To have to bend before mere humans (rakshashas eat them when in the mood!) and with Vanara allies, is an intolerable humiliation.

“Ravana was actually a Brahmin rakshasa, the greatest scholar of his time, having written treatises on ayurveda, the performing arts, and on machines of war.  His titanic power arose from the fact that he was a great devotee of Siva, and was capable of tremendous tapasya (spiritual austerities).  His Siva Tandava Stotram is one of the greatest devotional hymns known to man.

“It is difficult for such a being not to have an inflated sense of self.  Faced with Rama, his equal in every way, and another great devotee of Siva, he simply could not summon the awareness that in kidnapping Sita, he had committed a blunder that would devastate his people.

“A person who has been supernaturally successful is immune to any suggestion that does not please.  In Ravana’s case, nothing failed him as much as his success.  The brightly flaring Staves are Kala Danda – the staff of time, the remorseless chastisement of hubris that descends upon one in the grip of hamartia – the talent and force of personality that takes you to the pinnacle and is the seed of your ultimate destruction.  Ravana is succumbing to the Shadow side of the card.

If this card appears in a reading:

“Shadow – Complacency and arrogance because of early success.  Addicted to euphoria and to dangerous risks.  Toxic arrogance – promising leads and ventures are deflated.  Outright failure and defeat.  Do not offend people around you, as you will need them soon. The past is catching up with you;  is that good news or bad news?

Jane’s Notes
My impression is of the fragmenting or disintegration of a citadel of wisdom.  The ageless wisdom is simple: knowledge about it gathers complexity like a wheel through mud.  It accumulates priesthoods to maintain, maidenly trophies to win, and properties to defend.

Here is the finished card:

Kala Danda is the staff of time.  Within it is coiled the cyclic time of global tide and rotation. In the ancient world, the staff of life transmitted an electric currency of healing or destruction, as harnessed by its user.

It is said that the 4 sacred volumes of Hermes, containing the laws, science and theology of Egypt, correspond to 4 volumes of the Vedas, which the Puranas say were carried into Egypt by the Yadavas at the first emigration to that country from Hindustan.

If we travel any of the great sacred rivers upstream, we find their common source.  Who came first, the chicken or the egg?  the Vedic Hymns or upper Egypt?

Osiris and Thoth with “staves” of power and life

This depicts Ravana’s dislodged power as it leaves him through an emissary – his own brother negotiates with Rama.

Rohit Arya’s Notes 2003
“The illustration shows Rama promising to protect Vibheeshana, brother of Ravana against the advice of his monkey allies.  Rama’s hand is in abhaya mudra;  Vibheeshana is the figure with folded hands, third from left.

From Rohit’s Book with the Deck
“Vibheeshana, youngest brother of Ravana, has defected to Rama’s camp.  His irascible brother has just threatened to kill him, if he continued to remonstrate about the kidnapping of Sita and the annihilation awaiting them.  Vibheeshana knows that Rama is an avatar of Vishnu and invincible.  He also understands that not a stone of Lanka will be left standing, nor one rakshasha left alive to weep over the ruins, if the mad folly of Ravana continues unabated.

“To save his race and their civilisation, he seeks refuge with Rama … Vibheeshana has been granted enlightenment and immortality by Brahma, but he is still a fearsome looking rakshasha.  Even his name means ‘Terrible to behold’.  The Vanaras are suspicious of his defection.  Rakshashas are notorious for cannibalism, genocide and plunder, not for wisdom and enlightenment …  Their suspicion changes to puzzlement when Rama nobly accepts the plea of Vibheeshana … promising to spare all non-combatant rakshashas and crowning Vibheeshana king of the new golden city, instead of annexing it to his own kingdom.

In a reading:
“Light – Auspicious and propitious: feelings of joy and celebration.  Relax and wait, as success is there.  The card of the builder and decorator.  Favourable interventions by seniors and powerful people:  happy marriages.

“Shadow – Delays.  Property dealings are especially hampered.  Unmerited anxiety, tension and nervousness – a break or gap in work or career;  holding back out of fear.  Success is certain, but may be delayed.  What foundations can you lay now, that will endure?

Rohit’s Feedback to Three and Four of Staves:
“Wand 3: While the feeling of the demons scattering before the petulant wrath of Ravana is clear, there does not seem to be a clear focal point to the card.  The demons in the foreground are perhaps too distracting.  Perhaps they could be replaced with a couple of demons on chairs ringed round the demon king, holding their heads because they know their master has condemned all of them to destruction?

“The Ravana itself is a powerful and fascinating figure, but the card seems to be hanging somewhat in a context-less limbo.  Should we make the Ravana bigger and neater (more complete in regions like the crown and lower torso?)  It looks a bit unfinished compared to the other cards.”

(I do not recall if I altered this card or not.  We may have agreed it should stay the same, depicting an unstable situation where the shakti power held tightly by the demonic empire, begins to release.  An abyss opens up before Ravana’s throne.)

Rohit continues:  “Wand 4 – This is a very lovely card, and the observant and puzzled monkey is a delightful touch.  I would not change any of it.  I especially like the fact that Vibheeshana though a good demon, is nevertheless still a demon and looks grotesque.  It adds a very sharp edge to Rama’s unconditional extension of grace and protection granted to all who ask, even demons.“

Jane’s Notes
Yes – there is a beauty in confronting these strange beings of the underworld. 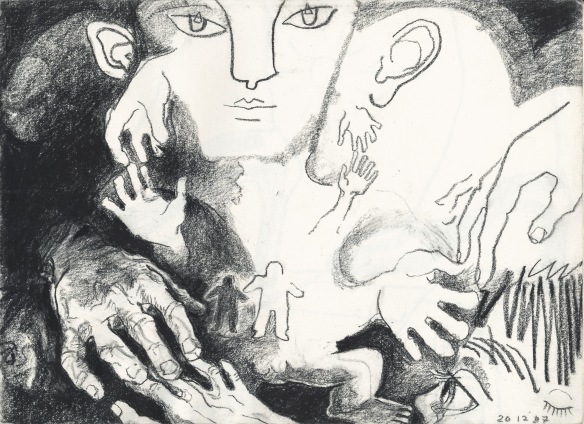 An interesting psychological point concerning demons:  they are forces of energetic consciousness, and they are not always negative.  The Yoga Vasishta teems with stories of great demons who attained to holiness through the force of their spiritual concentration – every raw force in the subconscious psyche has capacity to transform and to transmute.

The Greek daemon is a creative expression.

The child-hobbits to the right, are descending to the alchemical region below the forces of Karma which play on the surface landscape. 1987

The demons in Lanka faced destruction through their king’s arrogance.  Up to this point, they were effective guardians in the balance of nature.

For other Sacred India Tarot posts, look under Recent Posts, Search, or Archive of All Posts in the title bar.

All original art and creative writing in this blog is copyright © Janeadamsart 2012. May not be used for commercial purposes. May be used and shared for non-commercial means with credit to Jane Adams and a link to the web address https://janeadamsart.wordpress.com/