In my earlier post, More Sketches of Beethoven, I described a dream I had many years ago, that I tried to draw his daughter, who lived with him somewhere underneath Vienna.  It seemed at the time to parallel his efforts at composition, a titanic process of inspirational song, rain-soaked notebooks and hours or months of cutting, shaping and refining – it did not come easy for him.

I brought from my dream’s dark-room an impression down the years, of a child with a wide face and a fringe.  She was his child, or she was his soul – he looked through her eyes.  I met him in my dream, and we made an agreement.  That is all I remember – and the heart breaking toil of trying to portray her.   In those days I drew many children, capturing their essence in sometimes half an hour or less.   Not so, with this one!

I decided to try to reconstruct the dream – particularly when “Edwardian Piano” informed me that there was a daughter – it is said her mother, Josephine Brunswick, raised her as Minona Stakelberg. Josephine’s sister Therese alone was in the secret, which she kept until her grave.  On the website (see top of page under the Barenboim video), you can hear a couple of Minona’s Ecossaises for the piano.  It is a pity that they are played in  ‘electronic’ style.  I can imagine their grace and humour on an old Broadwood.

With sepia photos or daguerrotypes, I guess my way along, like a palaeontologist.  The photo looked at once familiar.  Her face in it is broad, yet heart shaped;  she looks a determined young woman.  In the other photo, she is an older woman.  She probably lost her teeth, and her nose looks longer.  I began with Neidl’s likeness of Beethoven, nearest to the dark child I see in my mind:

The young Beethoven – after the Neidl engraving

Minona’s face is rather thin here, which draws on information from both the photos. In old photos, much of the bone structure detail is blurred.  It is said her looks were dark and “Spanish”, like Beethoven’s.  My drawing doesn’t show much family likeness, but an exploration of this kind might touch unknown factors;  I do not know!

Finally I began work on this: 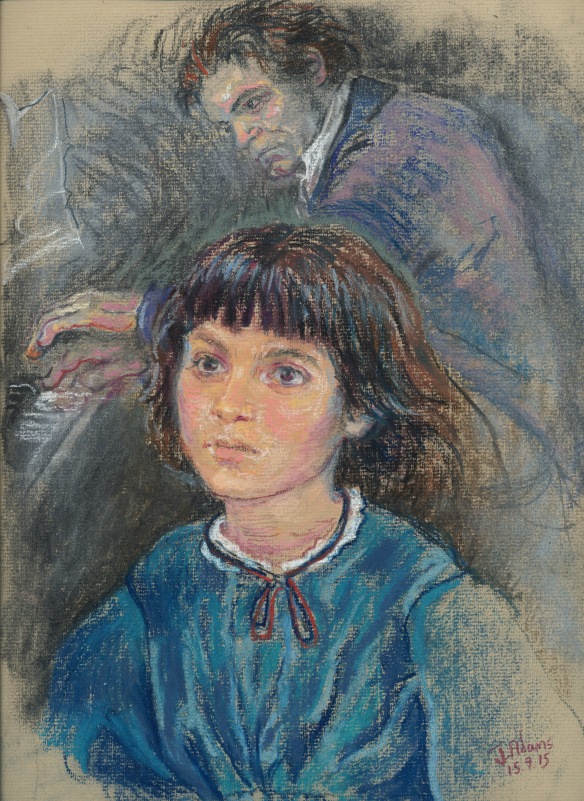 Beethoven and his natural daughter

…  and it is not finished, and cannot be, but is starting to speak.

There are mysteries between ourselves as human beings and our hidden continents and the things we grieve and share and conceal and stumble with, which can only be recognised and touched upon … beyond words.  We touch the hem of the robe.  The story’s pressure through my dream was the character of Beethoven’s illegitimate daughter, and how this condition made her strong, made her hear him, and grow up beyond her years.  This, like tidal currents in the sea which enter one another, has resonance.

Anton Schindler’s Impression of Beethoven at the piano:
“What the Sonata Pathetique was in the hands of Beethoven (although he left something to be desired as regards clean playing) was something that one had to have heard and heard again, to be quite certain that it was the same already well known work.  Above all, every single thing became, in his hands, a new creation, wherein his always legato playing, one of the particular characteristics of his execution, formed an important part.

“In his lessons, Beethoven taught: always place the hands on the keyboard so that the fingers do not rise any more than is strictly necessary, for only with this method is it possible to create a tone and to learn how to ‘sing’.  He hated staccato playing, especially in the execution of passages; he called it ‘finger dance’ or ‘leading the hands into the air.’

“The pieces which I myself heard Beethoven execute were, with few exceptions, always quite free of tempo limitations:  a tempo rubato in the truest sense of the word, according to the demands of the contents and situation without, however, the slightest tendency to caricature.  It was the clearest and most comprehensible declamation … as perhaps can only be elicited from his works.

“His older friends, who carefully followed the evolution of his spirit in every aspect, assure me that he developed this style in the first years of the third period of his life, and that he turned completely away from his earlier manner of playing with fewer nuances.  From this, it is clear that his urge towards discovery had already found the ways and means to open up with confidence the portals of the mystery to both laity and initiated.

“He wanted the Quartets to be performed in the same manner as the Sonatas, for they paint states of mind, as do the majority of his Sonatas.” 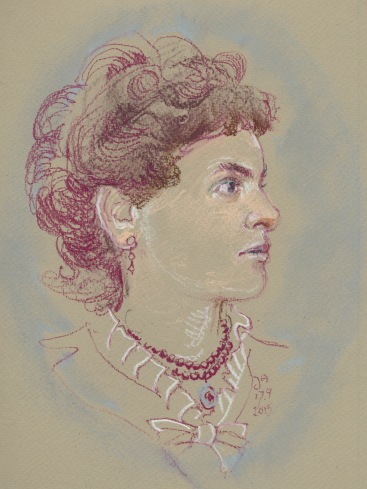 My adventure invites fellow travellers. I am a poet, an artist and a seer. I welcome conversation among the PHILO SOFIA, the lovers of wisdom.

This blog is a vehicle to promote also my published work – The Sacred India Tarot (with Rohit Arya, Yogi Impressions Books) and The Dreamer in the Dream – a collection of short stories (0 Books). Watch this space.

All art and creative writing in this blog is copyright © Janeadamsart 2012-2015. May not be used for commercial purposes. May be used and shared for non-commercial means with credit to Jane Adams and a link to the web address https://janeadamsart.wordpress.com/

14 thoughts on “Sketches of Beethoven and Minona”