THE DREAMER IN THE DREAM (illustrated) – A Collection of Tales by Jane Adams, published 29 June 2012 by 0 Books.   Available from booksellers in USA and UK, and on Amazon and as ebook. 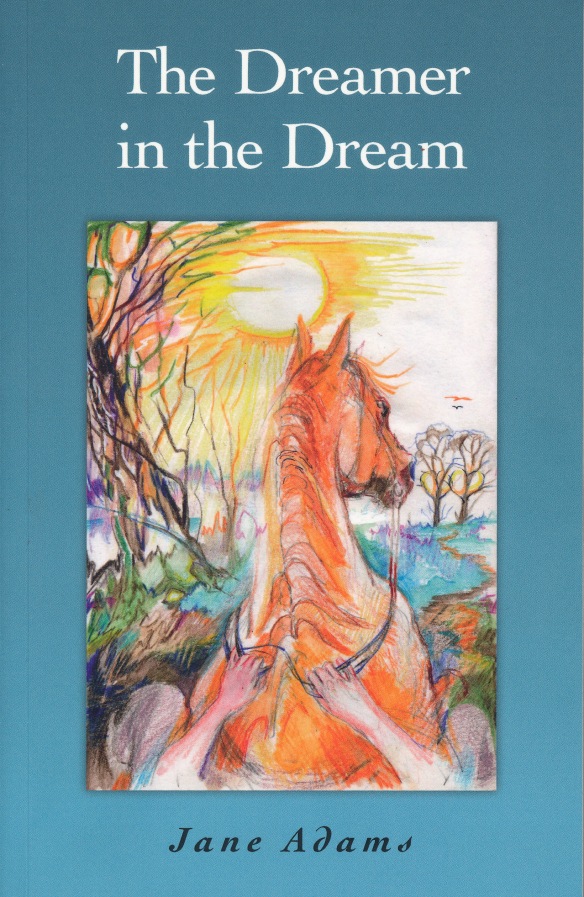 “A superbly original collection of short stories with an esoteric bias. Each story explores in different situations, often humorous, a paradoxical edge of experience, when the inner and outer life is about to transform; at any stage in life. These stories, light-hearted and profound, were rough hewn by the well known mind-body-spirit author Alan Jacobs, and turned into literary gems by Jane Adams, an artist, poet and author. They express this fertile dialogue, in the inner life. They include two childrens’ stories for the ever young in spirit. Major influences are Gurdjieff-Ouspensky, Douglas Harding, J.Krishnamurti, and a rich blend of wisdom from the east and west.”

Cover Illustration and 10 Drawings in the text, by JA

“O Books, the publishers of The Dreamer in the Dream, set out to produce works that challenge the academic and cultural norm.  This text evokes that strange Alice in Wonderland world that many people live in, in their day and night dreams, except here the implication is that it is not one of fantasy, but the frontier between external and internal reality, which gives access to what is really true.”

“The creative union of artist and author Jane Adams, and philosopher Alan Jacobs, has produced an exquisite collection of short stories that are quite simply spellbinding.  Examining profound truths through the art of charming and beguiling story telling, they have composed a beautiful and utterly unique compendium of eccentric tales that may be enjoyed by both children and adults alike.   A sheer delight!”

“These are some of the most gripping and interesting short stories that it has ever been my pleasure and privilege to read. Each contains an essential esoteric truth, enlivening and stimulating.  Jane has also the literary gift of being able to paint lively portraits with her pen.  I cannot recommend this book highly enough.” 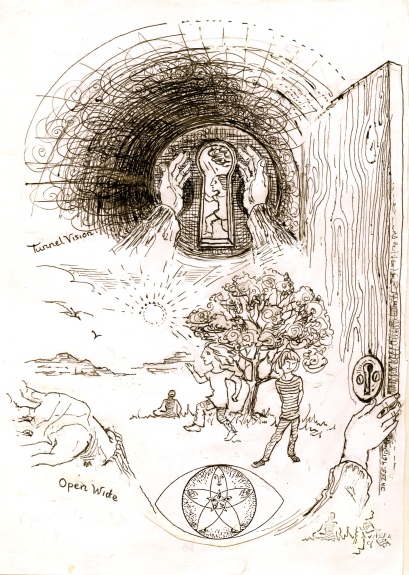 These tales were developed by Jane Adams from rough drafts in Alan Jacobs’ notebooks, and revised from time to time.

HERE ARE SOME EXTRACTS …

HIS HEAD strangely clearing as he streamed rivers of sweat, Jeremy very carefully and deliberately retreated and stood his ground.  He seemed to have no head at all now, but it didn’t matter.  With joyous equanimity the crowd passed through him like a flock of bright sheep and disappeared, and suddenly there was Auntie, bent and withered as an old apple, but quite steady on her pins and seizing his red Paisley tie with impish delight as she reached up to kiss him soundly on both cheeks … and as beautiful as the proverbial maiden behind the dragon’s tail.

Jeremy was astonished at his state of mind, but handed over to it, his reins of obligation.  With delicate gallantry he offered a strong arm to Aunt Mavis, carried all her luggage with the other, glanced at the train which now sat, strangely small and dismembered like a pig in its platform trough, and took her to lunch at the Savoy.

ONE OF his favourite training methods was to order the squad to the local wood, and drill us to “walk like cats”.  We had to feel our way as if by night, with full attention and without a sound, under his incessant fire.  The poor pimpled lads tried like moon walkers, to copy a cat.  They snapped fallen branches and lurched awkwardly under their kit, as their rifles tangled with the twigs.  “I said a CAT, a CAT you dam’ fool! not a sex starved rhino.  You ever seen a cat before?  I said a hundred times and I’ll say it again, the ENEMY SURROUNDS US.  DON’T GET CAUGHT OUT.  WATCH!”

ALL OF a sudden, there was a loud chatter, and their company grew.  A little bush squirrel and a curious Quail arrived onto the bank from nowhere.

“Who are you?” said Alice – she had got used to asking that question.

“Oh I’m just li’l Georgie and this here’s my Vice, Danny the Quail.  Sure glad to meet you.  Who’re you, honey?”

“I’m Alice!  These three trout are ‘scaping from a Tollah bird!  You must help them.  Can you tell me, Mr Squirrel please, what glastn ost and perresstro iker mean?   Uncle Gorblimey won’t stop saying them, and they might be bad words.”

“Sure thing, sweetie.  They mean Open the Door and Change Everything.”

HIS MOTHER kept her thoughts to herself, and told him to eat his breakfast – boiled egg with toasted soldiers, orange juice and a very nice cup of tea.  He ate all this while reading his favourite comic, which had been ironed by Hoskins as the paperboy always crumpled it up while posting it through the letterbox with the other newspapers.  Now it was time for school.  The chauffeur was sitting in the Rolls Royce, ready to take Graydo to school, and his Father to the office. 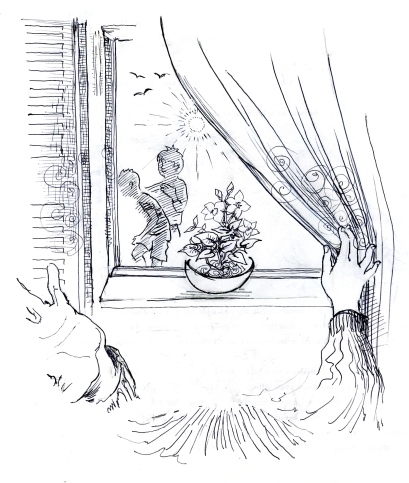 GLANCING AT Douglas, Fred wondered if he “had it” all the time.  As if reading his thoughts, Douglas rejoined that the “natural state” has to be constantly and devotedly recalled;  the essence of the Divine is this.  An image came to Fred, of clearing a floor for a dancer.  “It is called,” said Douglas richly “living without a head, Fred.   Look here!” – he swung his forefinger to a PASSING PLACE sign in the narrow lane – “even Nacton district council helps me to See.”

BETWEEN TWO wooded hills in mid Wales nestles Mabingdroth Wells, a little town which, at the time we have to tell, had forgotten the names of her dragons and lost the flavour of her waters.  Situated on the border of Powys and Gwynnedd and once a charming beauty spot, she was losing her youth to the big cities, her farmers to the Milk Marketing Board, and her looks to the inevitable eye-sores of municipal cosmetic development which encroach into the surrounding fields.  Her water supply was now plumbed from the Alwen Reservoir, and the local brewer who had kept her merry was now no more;  his sons had sold themselves to Courage Corporate.  Few visitors now bothered to beat the track to her door …

I HAVE, along with all my companions, suffered.  I have been cleaned with strange chemicals and retouched with prurient hands and varnished with shades of amber obscurity.  I know I am essential.  Were I not here, the canvas would be unconscious.  See, I hand to you my Master’s Eye, created from His original hand!  This inescapable gesture over three centuries, I patented and realized:  I am the Great Work.  Why else would so many people pay good guilders to gaze at me?    But I want to see myself! …

HE SHOWS the children how to play with fire, stalk ghosts and brew outlandish chemistries in a blackened pot.  Merlin himself may have taught him, but Marlowe being rather simple and repeatedly sun struck, has forgotten all save a very few simple spells.  He is the writer of Perceval’s “Mystery Play”.  Once upon a time he knew what the stars foretold, but it is all now hearsay.

“IMAGINATION,” he went on “a word containing image, the magus, magic, power, is a faculty of the Soul to bind and loose what she receives from the senses, all five of ‘em, to create new beings, to let them make love, make children, go forth.”

THE PROFESSOR paused again.  Now he is far away among the distant trees.  He is stroking Sabina’s soft fur, again and again, rhythmically.  Her pleasure warms his fingertips and palm.  The sensation barely registers cognitively;  yet sensuously it prevails.  Abstract cognition is his freedom.  She quietens and prepares his mind.  A range of snowy mountains excitingly beckons him;  like a chamois he leaps from crag to crag.  The cat stretches, yawns sharp teeth, flexes claws again.  From the accomplices in pleasure, the web spins on and on … 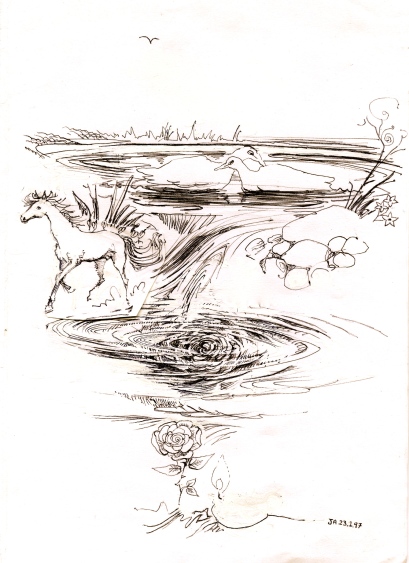 For the rose and the fire are one …

By Rohit Arya, inspired by Indian Mythology and Epics, and illustrated by Jane Adams

Published November 2011 by Yogi Impressions, Mumbai.  Available from bookstores and from the publishers and on Amazon. 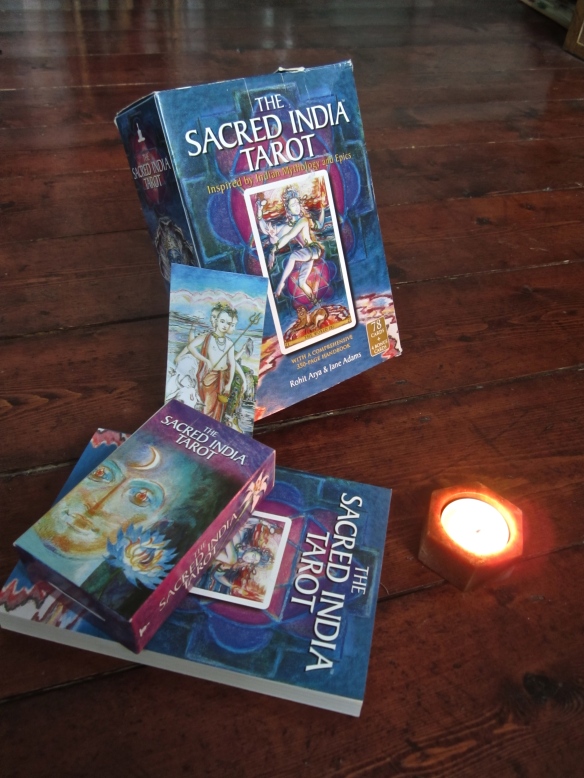 The Sacred India Tarot is unique in its synthesis of two mystical and meditational streams of world culture – the Tarot and Indian mythology. They blend amazingly well without compromising their own truths and cultural integrity. This is the first and only Tarot deck to work solely within the parameters of sacred Indian mythology – almost the only living mythology today. Millions of people daily worship, or meditate upon, the deities depicted within. This gives The Sacred India Tarot an unmatched spiritual power and contemporary resonance.

The Major Arcana depicts the archetypal forms of the gods and goddesses of India. The Indian epics, the Ramayana and Mahabharata, form two of the themes depicted in the suits of the Minor Arcana. Other themes in the suits include the life of the Buddha, and the great love story of the culture – that of Shiva and Parvati.

This stunningly beautiful deck is designed for readings as well as for meditation. The comprehensive, knowledgeable text in the accompanying Handbook explains the illustrations as well as their context within the Tarot. It provides insights on various aspects of Tarot, Indian mythology, card meanings, doing readings, and also includes unique spreads using Indian symbolism.

See also posts on The Sacred India Tarot Archive: creation of the cards, on https://janeadamsart.wordpress.com and http://aryoga.wordpress.com

The tarot deck is clearly a labour of love and it’s no surprise that it took over 10 years to bring into creation. To me it’s like having a personal guru/rishi who has the time to sit with me and guide me into my inner space, using metaphors, allegories, stories and archetype energies.

The amazing detail, synergistic energies and spiritual wisdom that converged to manifest in this sacred tarot is empowering at different levels. I have been reading cards for over 20 years and I have used dozens of decks from diverse traditions, representing a range of eclectic visions, but this is the one deck I hold in my heart because it is like a bridge to higher levels of consciousness.

The artwork is interesting and at times surreal, almost like vivid water coloured expressions, but not typically Indian. However, the sacred motifs and yantras along with the basic archetypal suit elements of the traditional tarot are present. To me the artwork isn’t the strength of this deck. What really powers this tarot is the subtle inner energy of the visionaries: namely the writer, the artist, and the others, including the divine energies, who facilitated its creation.

I doubt very much I will be using this tarot for divination; that would be like using a classic Rolls Royce to drag race on a dirt road. It will be a tool to develop higher consciousness. The Sacred India Tarot is worth a lot more than the price you have to pay for the deck and it’s one you’ll want to keep for a lifetime, providing you are a spiritual pilgrim, searching for a quiet awakening beyond the mundane realm of divination and everyday drama. I love lighting some incense and sitting quietly with this deck…it’s like being with one aspect of the divine energy that is Mother Saraswati.

I live in Canada and couldn’t get it delivered from Amazon’s US suppliers so I had to purchase from Yogi Impressions in India. No problems and it was delivered on time.

See also, posts on this blog, on the creation of the deck – The Sacred India Tarot Archive.