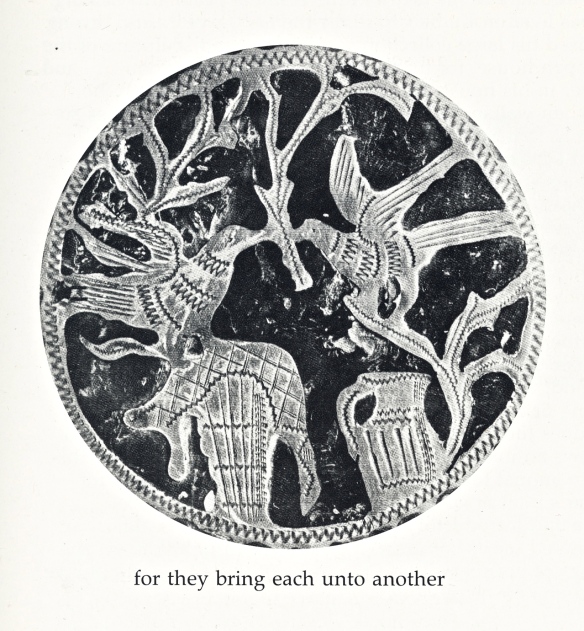 From “A Way of Life” by Jim Ede

A pair of swallows or starlings were in the room mating and looking instinctively for material with which to build a nest.  They seemed to clutch at straws.  I helped them by providing a little pile of grass which I put on the table.  In this way I neglected the people who were with me also in the room, but I was very concerned for the birds, that they should be able to perform their spring functions which they longed so much to do.  Even so, my ‘help’ went only a very little way.  The odds for their breeding and survival were against them, so I was their deceiver.

They built a nest with whatever they could find, quite desperately.

I showed this nest to the people I was with in the room.  “Look how round it is getting,” I said. “Look at the inter-weaving of all its strands, as if they were building out of doors in the branch of a tree.  How powerful the instinct is, even when it doesn’t have the right material.”

This short dream-story is of the series of Watershed Tales in this blog.  You can find others under Categories or Search.  It is about an old Karmically interwoven relationship which failed.

Yet it seems I was not the birds’ deceiver.  Many years later – that same nest is alive and well.  It transformed to a new relationship with life, alive with hope.   Like many young dreams, this one was full of opposite futures and double-entendre.

My future advises my past.   I felt this, long ago.   She continues to – miraculous and immense.   Time is no time. Life is unlabelled.   Dipping into a study book on Phenomenological Research methods, I found Clark Moustakas’ “Epoche”.

This is interesting, and on cue.   It seems to be what I always aimed towards. “The world … has been cleared of ordinary thought and is present before us as a phenomenon to be gazed upon, to be known naively and freshly through a ‘purified’ consciousness.”

Each morning here, for instance, I trawl my ordinary thoughts of the day before, until the inner Eye lights up and reveals their transmutation: shining fishes.

The way of the Alchemist is so. I feel around me softly, the Tetrahedral triads and lines from Nesting Tetrahedrons and The Djinn, as blessing.   However, who am I?

The ultimate Epoche is Self enquiry.   Discussing Epoche, Moustakas (author) goes into (recognisably) Buddhist and Vedanta method without naming so.   He is an academic but (discreetly) on a genuine spiritual path.   Good to tumble on this merger.

Do I cling to Kabbalist Lineage and its identity?   Why?

I have existential value and truth with Lineage. It is Saturn tempering Mars. It is an ancient skeleton holding a vital heartbeat.   It names and connects the wings of life, and shows me  to ride my bike safely and to live beyond constraint.   It is a Nest woven of all the Traditional twigs in love-knots, placed by the beak of the alighting bird, each a lifetime. But inside it are the unknown cosmic eggs.   The Nest allows the Egg to form and warm.

The paradox is – knowledge of the Traditions with my Un-named Epoche.   The Traditions and This.   The Mother and the quantum chick.   The egg shape solar system: above, below. 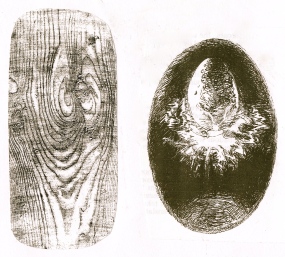 The birds tried to build a nest in an unsuitable place: their doomed love and urgency.  The nesting image is strong today, with the Quark eggs in it – a revolution of all traditions and their hens.   The Light of the World, tender and subtle, throws off dark garments.

“If your force shapes fullness, it does so because of its association with fullness. But to ensure that your formation continues to exist, it must remain tied to your strength. Through constant shaping you gradually lose your force, since ultimately all force is associated with the shapeliness that has been given form. Ultimately where you mistakenly imagine that you are rich, you have actually become poor, and you stand amidst your forms like a beggar.

“That is when the blinded man is seized by an increasing desire to give shape to things, since he believes that manifold increased formation will satisfy his desire.   Because he has spent his force, he becomes desirous: he begins to compel others into his service, and takes their force to pursue his own designs.”

There!   Isn’t that what happens with spiritual charisma and inflation?   Materialism … the culture of consumers?

But what is strength? Strength is before formation. 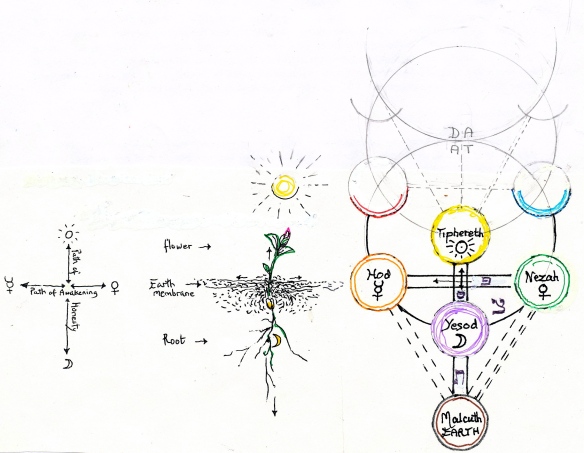 Paths of awakening, and the pillars

Jung’s statement above is Kabbalist: Solomon’s pillar of force before formation, in the Tao of Tifareth – soul triad – strength.   This is a kind of labelling, but no more so than musical notes which strike resonances or the song of birds.   It doesn’t pin down the Bird.

Ahhh the phoenix.   So vast an archetype!

The culture of consumers threatens the eco system and cliff-hangs the human race.   Even so, I have this deep feeling that it is ephemeral, it is tinsel vulgar, our consciousness suffers to saturation, the juggernaut imbalance.   In years, decades to come, the acute emergency leaves the general landscape but little changed; Gaia prevails.   There are perhaps rougher weather conditions and leaner economies.   Do I remain in the human trough, or do I see over its rim, into the field?

The human tapestry is itself, inescapable.   I share a wide angle Kabbalist view, across centuries.   Only the bottom end of Jacobs ladder is generally visible where it rests on Assiyah – the product of the 4 Worlds: the temporary friction and weight of those stepping onto it; their civil wars and disputes and abuse and poverty and grabbings and luxury basements.

But, I once dreamed – (in early Tarot days, about the Emperor) – I saw snow-waters pouring down the sheer mountain face, the great peal of the waters, and humans climbing up it, up and up, fading into the mist … always.

The dimensions veil each other.

So now. How to live and think and be, as Epoche?

I sat and looked in the dark well water. Phone rang at once – my mother. She is almost 90 – a Leo-Aries. I saw her garden, the flowers at Kilve in Somerset, her sore legs, Edinburgh and everywhere she is, and has been – long natter.

Live inclusively. Open unconditioned to what comes naturally.  Like this …  on Jordan Lake with the bald Eagle – Spirit – circling with its cries (watch the video clip!), and Teala’s little son replying.   Borrow strength!

2 thoughts on “A Tale from the Watershed: Birds Nest Epoche”